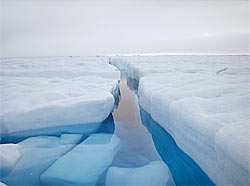 Each summer, meltwater ponds and lakes form on top of the Greenland ice sheet, as sunlight and warm air melt the surface. (Photo by Sarah Das, Woods Hole Oceanographic Institution)

Researchers from the Woods Hole Oceanographic Institution (WHOI) and the University of Washington (UW) have for the first time documented the sudden and complete drainage of a lake of meltwater from the top of the Greenland ice sheet to its base.

From those observations, scientists have uncovered a plumbing system for the ice sheet, where meltwater can penetrate thick, cold ice and accelerate some of the large-scale summer movements of the ice sheet.

According to research by glaciologists Sarah Das of WHOI and Ian Joughin of UW, the lubricating effect of the meltwater can accelerate ice flow 50- to 100 percent in some of the broad, slow-moving areas of the ice sheet.

“We found clear evidence that supraglacial lakes—the pools of meltwater that form on the surface in summer—can actually drive a crack through the ice sheet in a process called hydrofracture,” said Das, an assistant scientist in the WHOI Department of Geology and Geophysics. “If there is a crack or defect in the surface that is large enough, and a sufficient reservoir of water to keep that crack filled, it can create a conduit all the way down to the bed of the ice sheet.”

But the results from Das and Joughin also show that while surface melt plays a significant role in overall ice sheet dynamics, it has a more subdued influence on the fast-moving outlet glaciers (which discharge ice to the ocean) than has frequently been hypothesized. (To learn more about this result, read the corresponding news release from UW.)

The research by Das and Joughin was compiled into two complementary papers and published on April 17 in the online journal Science Express. The papers will be printed in Science magazine on May 9.

Co-authors of the work include Mark Behn, Dan Lizarralde, and Maya Bhatia of WHOI; Ian Howat, Twila Moon, and Ben Smith of UW; and Matt King of Newcastle University.

Thousands of lakes form on top of Greenland’s glaciers every summer, as sunlight and warm air melt ice on the surface. Past satellite observations have shown that these supraglacial lakes can disappear in as little as a day, but scientists did not know where the water was going or how quickly, nor the impact on ice flow.

Researchers have hypothesized that meltwater from the surface of Greenland’s ice sheet might be lubricating the base. But until now, there were only theoretical predictions of how the meltwater could reach the base through a kilometer of subfreezing ice.

“We set out to examine whether the melting at the surface—which is sensitive to climate change—could influence how fast the ice can flow,” Das said. “To influence flow, you have to change the conditions underneath the ice sheet, because what’s going on beneath the ice dictates how quickly the ice is flowing.”

“If the ice sheet is frozen to the bedrock or has very little water available,” Das added, “then it will flow much more slowly than if it has a lubricating and pressurized layer of water underneath to reduce friction.”

In the summers of 2006 and 2007, Das, Joughin, and colleagues used seismic instruments, water-level monitors, and Global Positioning System sensors to closely monitor the evolution of two lakes and the motion of the surrounding ice sheet. They also used helicopter and airplane surveys and satellite imagery to monitor the lakes and to track the progress of glaciers moving toward the coast.

The most spectacular observations occurred in July 2006 when their instruments captured the sudden, complete draining of a lake that had once covered 5.6 square kilometers (2.2 square miles) of the surface and held 0.044 cubic kilometers (11.6 billion gallons) of water.

Like a draining bathtub, the entire lake emptied from the bottom in 24 hours, with the majority of the water flowing out in a 90-minute span. The maximum drainage rate was faster than the average flow rate over Niagara Falls.

Closer inspection of the data revealed that the pressure of the water from the lake split open the ice sheet from top to bottom, through 980 meters (3,200 feet) of ice. This water-driven fracture delivered meltwater directly to the base, raising the surface of the ice sheet by 1.2 meters in one location.

In the middle of the lake bottom, a 750-meter (2,400 foot) wide block of ice was raised by 6 meters (20 feet). The horizontal speed of the ice sheet–which is constantly in motion even under normal circumstances–became twice the average daily rate for that location.

“It’s hard to envision how a trickle or a pool of meltwater from the surface could cut through thick, cold ice all the way to the bed,” said Das. “For that reason, there has been a debate in the scientific community as to whether such processes could exist, even though some theoretical work has hypothesized this for decades.”

The seismic signature of the fractures, the rapid drainage, and the uplift and movement of the ice all showed that water had flowed all the way down to the bed. As cracks and crevasses form and become filled with water, the greater weight and density of the water forces the ice to crack open.

As water pours down through these cracks, it forms moulins (cylindrical, vertical conduits) through the ice sheet that allow rapid drainage and likely remain open for the rest of the melt season.

Das, Joughin, and their field research team will be featured this summer during an online- and museum-based outreach project known as Polar Discovery. Their return research expedition to Greenland will be chronicled daily through photo essays, and the researchers will conduct several live conversations with students, educators, and museum visitors via satellite phone.

Funding for the research was provided by the National Science Foundation, the National Aeronautics and Space Administration, the WHOI Clark Arctic Research Initiative, and the WHOI Oceans and Climate Change Institute.

The Woods Hole Oceanographic Institution is a private, independent organization in Falmouth, Mass., dedicated to marine research, engineering, and higher education. Established in 1930 on a recommendation from the National Academy of Sciences, its primary mission is to understand the oceans and their interaction with the Earth as a whole, and to communicate a basic understanding of the oceans’ role in the changing global environment.