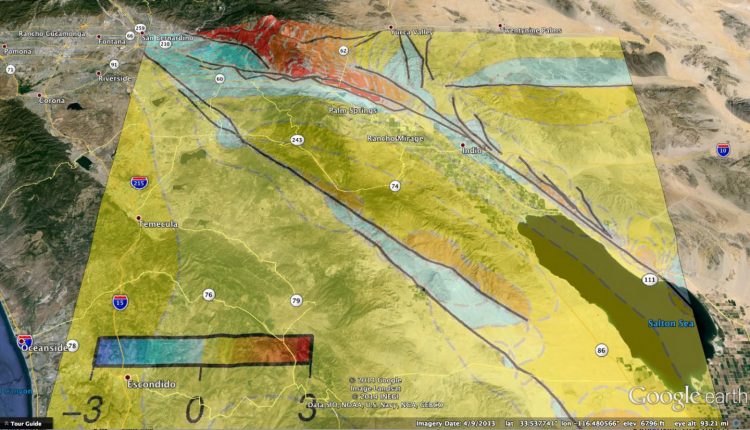 The Coachella Valley segment of the southernmost section of the San Andreas Fault in California has a high likelihood for a large rupture in the near future, since it has a recurrence interval of about 180 years but has not ruptured in over 300 years. Credit: UMass Amherst and Google Earth

New three-dimensional (3D) numerical modeling that captures far more geometric complexity of an active fault segment in southern California than any other, suggests that the overall earthquake hazard for towns on the west side of the Coachella Valley such as Palm Springs and Palm Desert may be slightly lower than previously believed.

New simulations of deformation on three alternative fault configurations for the Coachella Valley segment of the San Andreas Fault conducted by geoscientists Michele Cooke and Laura Fattaruso of the University of Massachusetts Amherst, with Rebecca Dorsey of the University of Oregon, appear in the December issue of Geosphere.

The Coachella Valley segment is the southernmost section of the San Andreas Fault in California. It has a high likelihood for a large rupture in the near future, since it has a recurrence interval of about 180 years but has not ruptured in over 300 years, the authors point out.

The researchers acknowledge that their new modeling offers “a pretty controversial interpretation” of the data. Many geoscientists do not accept a dipping active fault geometry to the San Andreas Fault in the Coachella Valley, they say. Some argue that the data do not confirm the dipping structure. “Our contribution to this debate is that we add an uplift pattern to the data that support a dipping active fault and it rejects the other models,” say Cooke and colleagues.

Their new model yields an estimated 10 percent increase in shaking overall for the Coachella segment. But for the towns to the west of the fault where most people live, it yields decreased shaking due to the dipping geometry. It yields a doubling of shaking in mostly unpopulated areas east of the fault. “This isn't a direct outcome of our work but an implication,” they add.

Cooke says, “Others have used a dipping San Andreas in their models but they didn't include the degree of complexity that we did. By including the secondary faults within the Mecca Hills we more accurately capture the uplift pattern of the region.”

Fattaruso adds, “Others were comparing to different data sets, such as geodesy, and since we were comparing to uplift it is important that we have this complexity.” In this case, geodesy is the science of measuring and representing the Earth and its crustal motion, taking into account the competition of geological processes in 3D over time.

Most other models of deformation, stress, rupture and ground shaking have assumed that the southern San Andreas Fault is vertical, say Cooke and colleagues. However, seismic, imaging, aerial magnetometric surveys and GPS-based strain observations suggest that the fault dips 60 to 70 degrees toward the northeast, a hypothesis they set out to investigate.

Specifically, they explored three alternative geometric models of the fault's Coachella Valley segment with added complexity such as including smaller faults in the nearby Indio and Mecca Hills. “We use localized uplift patterns in the Mecca Hills to assess the most plausible geometry for the San Andreas Fault in the Coachella Valley and better understand the interplay of fault geometry and deformation,” they write.

Cooke and colleagues say the fault structures in their favored model agree with distributions of local seismicity, and are consistent with geodetic observations of recent strain. “Crustal deformation models that neglect the northeast dip of the San Andreas Fault in the Coachella Valley will not replicate the ground shaking in the region and therefore inaccurately estimate seismic hazard,” they note.

This work was supported by the National Science Foundation. More: http://geosphere.gsapubs.org/content/10/6/1235.abstract