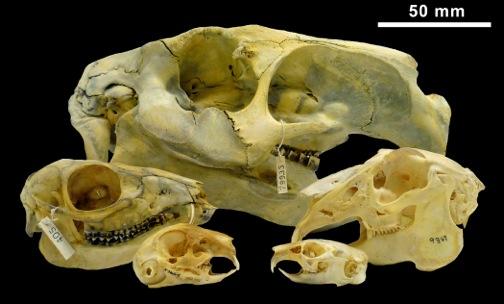 One of the most extreme examples of this observation is found in the comparison of rodents (Rodentia) and rabbits (Lagomorpha). These two mammalian orders are sister groups, but while rodents have diversified to over 2000 living species and an enormous range of body sizes, lagomorphs (rabbits, hares, and pikas) are limited to fewer than 100 relatively small species.

A new study presented at the Society of Vertebrate Paleontology Annual Meeting shows, surprisingly, that competition with ungulates (hoofed mammals), intensified by climate change, are to blame for the lagomorphs' limited diversity.

Susumu Tomiya of the Field Museum of Natural History and Lauren Miller of the University of California at Berkeley were intrigued by the observation that lagomorphs have spread to all continents except Antarctica and inhabit a variety of environments, but the group contains only about 80 living species of small herbivores, compared to roughly 2,000 species of rodents.

According to Dr. Tomiya, “Mammalian groups that are ubiquitous at the global scale–rodents and bats, for example–tend to be species-rich and show many different ways of living. Lagomorphs are a paradox in this sense.” Lagomorphs also show a much more limited range of body size and forms relative to rodents: the average weight of the largest living species (Alaskan hare) is approximately 5 kg (11 lb), whereas the largest living rodent (capybara) is twelve times larger at about 60 kg (133 lb).

Given that the two groups are each other's closest evolutionary relatives, and they have been evolving for roughly the same amount of time (~55 million years, give or take a few million years), the difference in their diversity is striking.

Importantly, fossils from Mediterranean islands show that lagomorphs are capable of becoming much larger than seen today. Nuralagus rex from the Pliocene of Minorca is estimated to have weighed about 12 kg. Ecologists and evolutionary biologists have suggested that such gigantism can take place only in absence of competitors, as is sometimes the case with island faunas.

They reasoned that, if competition were an important factor in determining body size evolution, the conspicuous absence of giant lagomorphs (by today's standards) on continents could be explained by long-standing presence of potential competitors, such as ungulates (e.g., horses, deer, cows, pigs, and their extinct relatives).

Tomiya and Miller tested this hypothesis by examining the rich North American fossil record. They compared the trajectories of maximum lagomorph body size and minimum ungulate body size over the last 30 million years, revealing two phases of body size evolution in lagomorphs. In the late Oligocene, the largest lagomorphs (comparable in body mass to medium-sized hares living today) coexisted with similar-sized and even smaller ungulates (some of which were as small as modern-day cottontails).

This body-size relationship was fundamentally altered following a major climatic transition that prompted opening-up of forests and establishment of grasslands in the early Miocene. For the next 20 million years or so, the maximum lagomorph size shifted in parallel with the minimum ungulate size, suggesting a dynamic body-size boundary between the two groups maintained by competitive interactions.

This study suggests that competitive interactions (and resulting division of resources that minimizes such interactions) may be a key factor determining diversification of mammals over millions of years. From a broader perspective, this study suggests that large-scale shifts in climate and available habitats can leave a long-lasting impact on the subsequent courses of evolution of major mammalian groups by altering their ecological interactions.

As Dr. Tomiya notes, “Much of the discussion about the current biodiversity crisis has revolved around saving species from extinctions. From a paleontological perspective, we believe that it is also important to think about the future of what will turn out to be surviving lineages, that is, how human activities are altering the courses of their evolution through modification of landscapes, seascapes, and atmosphere at the planetary scale. Millions of years from now, our own species may no longer exist, but whatever remains of life on Earth will reflect the decisions we make today about how we live as a species.”

Miller, who measured modern lagomorph specimens to estimate body masses of extinct species, adds that natural history collections are crucial in this sense, “This study highlights the creative ways in which museum specimens can be used to provide data over a longer time sequence. Even something as seemingly old-fashioned as rabbit skins with handwritten weight measurements can be utilized with modern techniques to better understand current conditions and future trajectories of biodiversity.”

About the Society of Vertebrate Paleontology

Founded in 1940 by thirty-four paleontologists, the Society now has more than 2,300 members representing professionals, students, artists, preparators, and others interested in VP. It is organized exclusively for educational and scientific purposes, with the object of advancing the science of vertebrate paleontology.

OTHER EXPERTS NOT ASSOCIATED WITH THIS STUDY