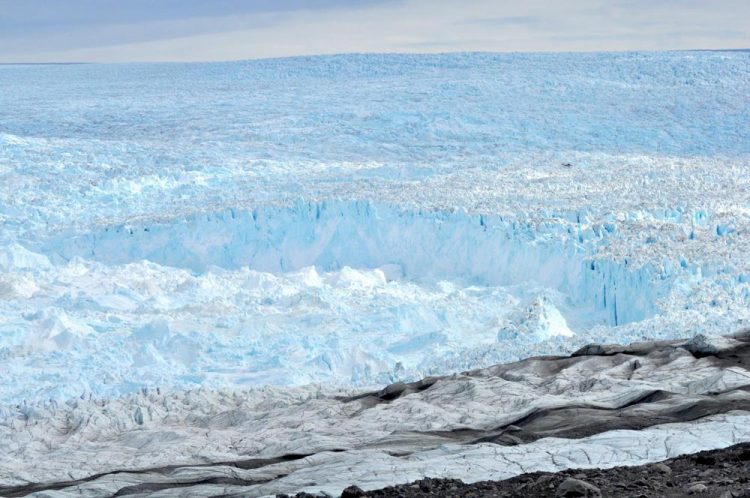 In August 2012, in the frigid wilderness of West Greenland, the Jakobshavn Glacier was flowing and breaking off into the sea at record speeds, three times faster than in previous years. An underwater calving event had caused the massive glacier to lose its footing. But the movement was not linear like a runaway train (as previous studies suggested), but dynamic: drastically speeding up, then slowing down after a few days.

Now, a new assessment by a multi-institutional, CIRES-led team has harnessed a novel, highly detailed dataset to identify the factors that caused the speedup and slowdown. As the glacier flowed faster, it became thinner and more unstable–and then, in a twist, a pileup of thick ice replenished the glacier's terminus, slowing it down again.

The work, published today in the Journal of Glaciology, may help scientists better predict how tidewater glaciers contribute to sea level rise.

“As tidewater glaciers, like Jakobshavn Isbræ, thin they become increasingly sensitive to small variations in ice thickness,” said Ryan Cassotto, CIRES researcher and lead author of the new study, which was conducted while he was a doctoral student at the University of New Hampshire. “This is because water pressure at the base of the glacier counters pressure from the weight of ice above it, which impacts how fast the glacier flows.”

Jakobshavn Isbræ, the subject of James Balog's 2012 documentary “Chasing Ice,” produces some of the largest icebergs and fastest speeds in the Arctic. And since iceberg calving contributes significantly to sea level rise, it's critical to understand the glacier dynamics and calving events that produce them, the researchers said.

“Over the last two decades, Jakobshavn Isbræ has discharged more ice than any other glacier in Greenland,” said Cassotto. “It alone contributes about three percent of the current rise in global sea level annually.”

They used instruments called ground-based radar interferometers to observe how the ice surface was deforming, measuring every three minutes. Calving events happen in a matter of minutes and so they often can't be caught by satellite-based instruments that repeat measurements only every 11 days.

Cassotto and his team found the geometry of the fjord bed is critically important to understanding glacier speed, as others have proposed. The new work shows that even small changes at the ends of glaciers, those last several hundred feet moving out toward the ocean, can profoundly affect speed.