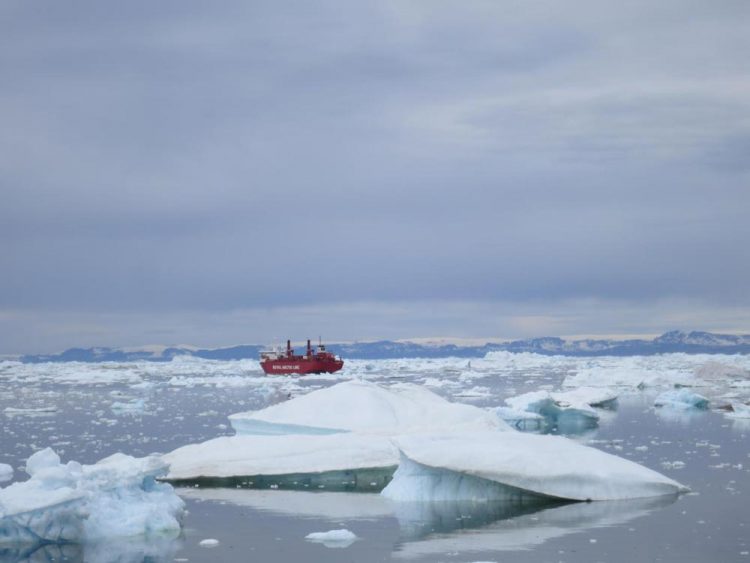 A new study shows that half of all Arctic warming and corresponding sea-loss during the late 20th century was caused by ozone-depleting substances. Here, icebergs discharged from Greenland's Jakobshavn Glacier. Credit: Kevin Krajick/Earth Institute

A scientific paper published in 1985 was the first to report a burgeoning hole in Earth's stratospheric ozone over Antarctica. Scientists determined the cause to be ozone-depleting substances – long-lived artificial halogen compounds. Although the ozone-destroying effects of these substances are now widely understood, there has been little research into their broader climate impacts.

A study published today in Nature Climate Change by researchers at Columbia University examines the greenhouse warming effects of ozone-depleting substances and finds that they caused about a third of all global warming from 1955 to 2005, and half of Arctic warming and sea ice loss during that period. They thus acted as a strong supplement to carbon dioxide, the most pervasive greenhouse gas; their effects have since started to fade, as they are no longer produced and slowly dissolve.

Ozone-depleting substances, or ODS, were developed in the 1920s and '30s and became popularly used as refrigerants, solvents and propellants. They are entirely manmade, and so did not exist in the atmosphere before this time. In the 1980s a hole in Earth's stratospheric ozone layer, which filters much of the harmful ultraviolet radiation from the sun, was discovered over Antarctica. Scientists quickly attributed it to ODS.

The world sprang into action, finalizing a global agreement to phase out ODS. The Montreal Protocol, as it is called, was signed in 1987 and entered into force in 1989. Due to the swift international reaction, atmospheric concentrations of most ODS peaked in the late 20th century and have been declining since. However, for at least 50 years, the climate impacts of ODS were extensive, as the new study reveals.

Scientists at Columbia's School of Engineering and Applied Science and the Lamont-Doherty Earth Observatory used climate models to understand the effects of ODS on Arctic climate.

“We showed that ODS have affected the Arctic climate in a substantial way,” said Lamont-Doherty researcher Michael Previdi.

The scientists reached their conclusion using two very different climate models that are widely employed by the scientific community, both developed at the U.S. National Center for Atmospheric Research.

The results highlight the importance of the Montreal Protocol, which has been signed by nearly 200 countries, say the authors.

“Climate mitigation is in action as we speak because these substances are decreasing in the atmosphere, thanks to the Montreal Protocol,” said Lorenzo Polvani, lead author of the study and a professor in Columbia's Department of Applied Physics and Applied Mathematics.

“In the coming decades, they will contribute less and less to global warming. It's a good-news story.”

A copy of the paper may be obtained by writing press@nature.com.