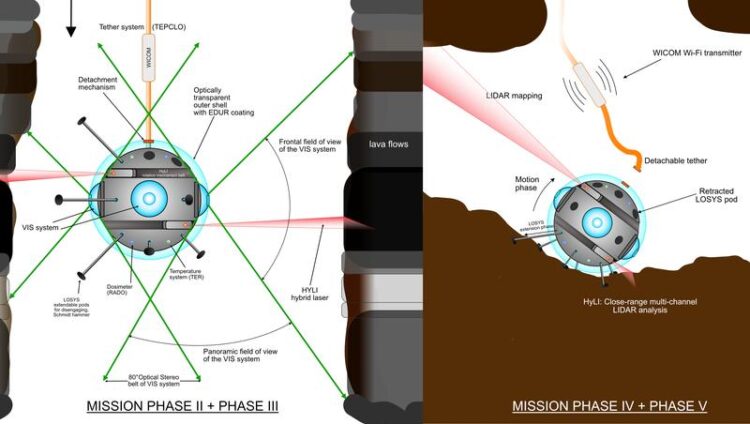 ESA's mission would be the first robotic exploration of a subsurface lava tube on the Moon.
Riccardo Pozzobon / University of Padova / Daedalus Team

The surface of the moon is well mapped, but the same is not true for its subsurface. In preparation for future lunar missions, the European Space Agency (ESA) was looking for innovative ideas on how caves and lava tubes on the moon could be discovered, studied and measured. Scientists and students from Jacobs University Bremen are involved in one of the two concepts that have been accepted.

Millions of craters cover the lunar surface. But photos also show steep faced pits that could be entrance gates to extensive lava tubes which could be ten to hundreds of kilometers long. Researchers believe these tubes were formed by lava flows billions of years ago, when the moon was still geologically active.

“Exploring and mapping these lava tunnels could provide new information about the geology of the Moon. They could also be an interesting option as a long-term shelter for future human visitors to the Moon,” explained Franceso Sauro, director of ESA’s Pangaea astronaut training program in planetary geology. “They would shield astronauts from cosmic rays and micrometeorites, and potentially provide access to icy water and other resources trapped underground.”

The concept, defined by an international team of scientists with participation from Jacobs University, involves building a compact, spherical robot. Daedalus, as it is called, is equipped with a 3D scanner and cameras, among other things, and can move autonomously. By creating a 3D model of the inside of a lava tube, the robot will identify geological resources and search for locations with stable radiation levels and temperatures. ESA has defined a cave in the Marius Hills region as a possible landing site. Around 34 meters deep and 65 by 90 meters wide, it could be the gateway to a system of extensive lava tubes.

“ESA’s mission would be the first robotic exploration of a subsurface lava tube on the Moon,” said Angelo Pio Rossi, Professor of Earth and Planetary Science at Jacobs University. “We helped define the concept as well as develop the robot and characterize the landing site.” In addition to Rossi, other participants from Jacobs University include Francesco Maurelli, Professor of Marine Systems with focus on Marine Robotics, and Vikram Unnithan, Professor of Geosciences.

Studying in an international community. Obtaining a qualification to work on responsible tasks in a digitized and globalized society. Learning, researching and teaching across academic disciplines and countries. Strengthening people and markets with innovative solutions and advanced training programs. This is what Jacobs University Bremen stands for. Established as a private, English-medium campus university in Germany in 2001, it is continuously achieving top results in national and international university rankings. Its more than 1,500 students come from more than 120 countries with around 80% having relocated to Germany for their studies. Jacobs University’s research projects are funded by the German Research Foundation or the EU Research and Innovation program as well as by globally leading companies.