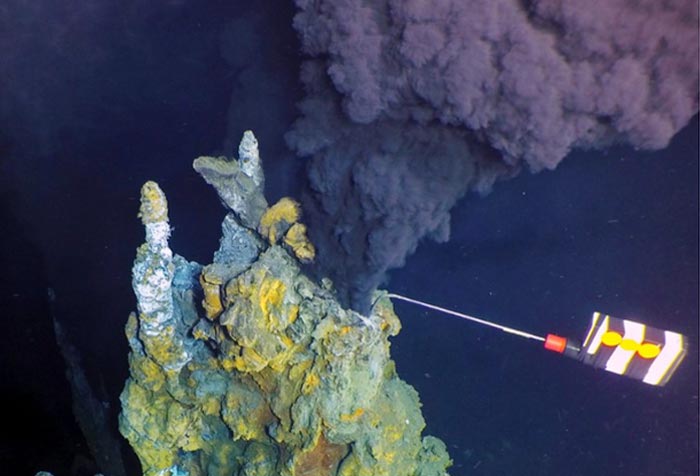 Finding a new, high-temperature, off-axis hydrothermal vent field on the floor of the Pacific Ocean at 2550 meters depth could change scientists’ understanding of the impact that such ocean-floor vent systems have on the life and chemistry of Earth’s oceans.

A team of researchers including Jill McDermott, chemical oceanographer and faculty member in Lehigh University’s Department of Earth and Environmental Sciences, discovered the off-axis hydrothermal field, named YBW-Sentry, in the area of the global mid-ocean ridge known as the East Pacific Rise. The study area is about 200 miles off the coast of western Mexico. The new vent site covers an area equivalent to a football field, roughly twice the size of the nearest active hydrothermal vents in the region. The chimneys resemble candelabras that are the height of a three-story building. The findings have been published today in an article entitled: “Discovery of Active Off-Axis Hydrothermal Vents at 9° 54’N East Pacific Rise,” in the Proceedings of the National Academy of Sciences (PNAS).

Deep-sea hydrothermal vents are found around the world, most often in volcanically active locations along the crest of the global mid-ocean ridge system. Magmatic activity, driven by upwellings of heat in Earth’s mantle, causes the brittle tectonic plates that make up Earth’s outer shell, or crust, to split. As the plates spread, new seafloor rock is formed by magmatic activity and volcanic eruptions. This magmatic and tectonic activity creates cracks through which sea water percolates in crustal rocks. Much like hot springs on land, hydrothermal vents spout mineral-rich liquid that has been heated beneath the seafloor.

The research that led to the discovery of the off-axis vent field along the East Pacific Rise was spearheaded by the McDermott lab at Lehigh University  The team collects fluids from the black smoker chimneys and analyzes them for their geochemical characteristics, which can indicate the temperatures at which the fluids are forming. Hotter temperatures could be a sign of an impending eruption. At the same time, the team also instruments the active vent chimneys with self-recording fluid temperature loggers to provide measurements every ten minutes over 2-year time periods. The temperature measurements provide a time series of the changes the vents experience. The research team has nine vents instrumented in the study area.

Near-bottom bathymetric surveys conducted by the research team between 2018 and 2021 with the autonomous underwater vehicle (AUV) Sentry, provided by Woods Hole Oceanographic Institution’s (WHOI) National Deep Submergence Facility, produced the high-resolution (1 meter) maps that resolve very small seafloor features, according to  Ross Parnell-Turner, a geophysicist at Scripps Institution of Oceanography in California, and a co-author of the paper.

“We identified an off-axis field of tall pinnacles, and we assumed that they were either older volcanic spires or inactive hydrothermal chimneys deposited long ago,” says Parnell-Turner.

Daniel J. Fornari, a marine geologist at WHOI and a co-author of the paper noted, “We were astounded that not only was the field very active, but it is larger in area and hotter in origin temperature than any other hydrothermal vent field known along this portion of the East Pacific Rise that has been studied for the past 30 years,”

According to McDermott, over the past 15 years, the ways in which scientists study and sample the seafloor have been revolutionized by the high-resolution maps produced by autonomous underwater vehicles. The maps generated by the AUV sonars are similar in scale to what is used in land-based geological surveying and mapping using a variety of sophisticated techniques that include drone mapping and laser scanning.

“Very few areas in the deep ocean have been mapped at high-resolution using deep submergence technologies,” says Parnell-Turner, co-author. “However, major discoveries can be made by collecting near-bottom bathymetry using AUVs.”

The search for active hydrothermal vents has historically focused on the trough that marks the axis and locus of most of the volcanic eruptions along the East Pacific Rise. The team has been expanding the high-resolution map west and east of this axial trough, between 9° 45-57’N latitude, for the past three years using the NDSF’s Sentry AUV. McDermott describes NDSF as “NASA of the deep-sea.”

“The mapping work provides a detailed picture of the seafloor so that we can monitor and quantify changes that occur when the next volcanic eruption happens along this portion of the East Pacific Rise ridge axis,” says McDermott.

Two previous eruptions have occurred at this site―in 1991-1992, and again in 2005-2006―and the team forecasts that the next eruption could occur within the next few years, according to Thibaut Barreyre, a geophysicist at the University of Bergen in Norway and a co-author.

“The new vent field may seed recovering hydrothermal ecosystems after volcanic eruptions,” says Santiago Herrera, a co-author who is a biological oceanographer and faculty member in Lehigh University’s Department of Biological Sciences.

“There is much still left to be discovered about deep-sea vents along the global mid-ocean ridge, both in terms of where they are located as well as their geological, geochemical and biological characteristics,” says McDermott. “I hope our study will motivate future research efforts to target mapping off-axis areas along the global mid-ocean ridge crest to better quantify the extent of off-axis versus on-axis hydrothermal venting.”

Learn more about McDermott collaborative research on hydrothermal vents: Arctic Deep-Sea Expedition ‘Like Taking a Trip to the Moon.’