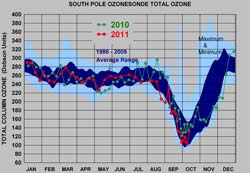 Ozone levels in the atmosphere above the South Pole dropped to a seasonal low of 102 Dobson Units Oct. 9, tied for the 10th lowest in the 26-year record. The ozone layer helps protect the planet’s surface from harmful ultraviolet radiation. Every year, an ozone hole forms above the Antarctic for several weeks, because of environmental conditions and the presence of ozone-depleting chemicals. (Credit: NOAA)<br>

The ozone layer helps protect the planet’s surface from harmful ultraviolet radiation. NOAA and NASA use balloon-borne instruments, ground instruments, and satellites to monitor the annual South Pole ozone hole, global levels of ozone in the stratosphere, and the manmade chemicals that contribute to ozone depletion.

“The upper part of the atmosphere over the South Pole was colder than average this season and that cold air is one of the key ingredients for ozone destruction,” said James Butler, director of NOAA’s Global Monitoring Division in Boulder, Colo. Other key ingredients are ozone-depleting chemicals that remain in the atmosphere and ice crystals on which ozone-depleting chemical reactions take place.

“Even though it was relatively large, the size of this year's ozone hole was within the range we'd expect given the levels of manmade, ozone-depleting chemicals that continue to persist,” said Paul Newman, chief atmospheric scientist at NASA's Goddard Space Flight Center.

Levels of most ozone-depleting chemicals are slowly declining due to international action, but many have long lifetimes, remaining in the atmosphere for decades. Scientists around the world are looking for evidence that the ozone layer is beginning to heal, but this year’s data from Antarctica do not hint at a turnaround.

In August and September (spring in Antarctica), the sun begins rising again after several months of darkness. Circumpolar winds keep cold air trapped above the continent, and sunlight-sparked reactions involving ice clouds and manmade chemicals begin eating away at the ozone. Most years, the conditions for ozone depletion ease by early December, and the seasonal hole closes.

Global atmospheric models predict that stratospheric ozone could recover by the middle of this century, but the ozone hole in the Antarctic will likely persist one to two decades beyond that, according to the latest analysis by the World Meteorological Organization, the 2010 Ozone Assessment, with co-authors from NOAA and NASA.

Researchers do not expect a smooth, steady recovery of Antarctic ozone, because of natural ups and downs in temperatures and other factors that affect depletion, noted NOAA ESRL scientist Bryan Johnson. Johnson helped co-author a recent NOAA paper that concluded it could take another decade to begin discerning changes in the rates of ozone depletion.

Johnson is part of the NOAA team tracks ozone depletion around the globe and at the South Pole with measurements made from the ground, in the atmosphere itself and by satellite. Johnson’s “ozonesonde” group has been using balloons to loft instruments 18 miles into the atmosphere for 26 years to collect detailed profiles of ozone levels from the surface up. The team also measures ozone with satellite and ground-based instruments.

NASA measures ozone in the stratosphere with the Ozone Monitoring Instrument (OMI) aboard the Aura satellite. OMI continues a NASA legacy of monitoring the ozone layer from space that dates back to 1972 and the launch of the Nimbus-4 satellite.

A new satellite scheduled to launch this month, the NPP satellite, features a new ozone-monitoring instrument, the Ozone Mapping and Profiler Suite, which will provide more detailed daily, global ozone measurements than ever before to continue the task of observing the ozone layer's gradual recovery. The NPP satellite is part of Joint Polar Satellite System, a program of NOAA, NASA and the Department of Defense (formerly known as the NPOESS Preparatory Project). It is scheduled to launch October 27 from Vandenberg Air Force Base in California.

NOAA’s mission is to understand and predict changes in the Earth's environment, from the depths of the ocean to the surface of the sun, and to conserve and manage our coastal and marine resources. Join us on Facebook, Twitter and our other social media channels.