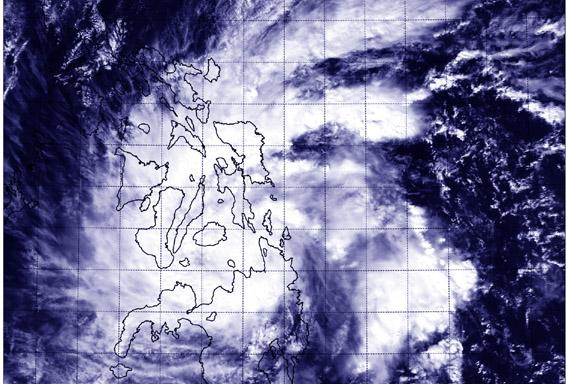 NASA's Aqua satellite captured this image of Tropical Storm Jangmi over the central and southern Philippines on Dec. 29 at 5:05 UTC. Image Credit: NASA/NRL

Many warnings remain in effect as Jangmi continues moving west toward the South China Sea. On Dec. 29, public storm warning signal #1 is in effect in the Visayas provinces of Leyte, Southern Leyte, Camotes Island, rest of Cebu, rest of Negros Occidental, Guimaras, southern part of Iloilo and southern part of Antique. The public storm warning #1 is also in effect in the Mindanao provinces of Bukidnon, Lanao del Norte and Sur, Misamis Occidental Zamboanga del Norte and Sur and Sibugay, Agusan del Sur.

Tropical Storm Jangmi made landfall in northeastern Mindanao, Philippines on Dec. 28 and has moved across the central part of the country. NASA's Aqua satellite passed over Jangmi on Dec. 29 at 05:05 UTC (12:05 a.m. EST) and saw that the storm was over the Visayas (central) and Mindanao (southern) regions of the country. Bands of thunderstorms wrapped into the center from the northeastern and southeastern quadrants stretching back over the Philippine Sea (east of the country).

The Joint Typhoon Warning Center (JTWC) looked at animated enhanced infrared satellite imagery and a radar animation from Cebu Station, Philippines that showed Jangmi intensified as it tracked across the Surigao Strait. The low level circulation had become more tightly wrapped and better defined despite a weakening in the bands of thunderstorms as the system made landfall across Bohol Island.

JTWC's forecast on Dec. 29 calls for Jangmi to move in a west-southwesterly direction through the Sulu Sea and over southern Palawan before moving into the South China Sea while maintaining strength as a tropical storm. The current JTWC forecast track takes Jangmi toward the border of southern Thailand and northern Malaysia around January 3, 2015.