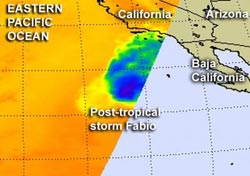 When NASA's Aqua satellite passed over post-tropical storm Fabio on July 18 at 1023 UTC (6:23 a.m. EDT), the Atmospheric Infrared Sounder (AIRS) instrument captured temperatures of cloud tops and the sea surface. AIRS data showed very little strong convection and heavy rainfall occurring in the post-tropical storm and it was north of the center of circulation. Wind shear from the south is pushing the showers north of the center.

Sea surface temperatures are not warm enough to support a tropical cyclone because they are colder than 22 Celsius (71.6 Fahrenheit) in the area Fabio is moving through.

At 11 a.m. EDT on July 18, the National Hurricane Center issued their final advisory on post-tropical storm Fabio. At that time, Fabio was about 535 miles (855 km) south-southwest of San Diego, California, near latitude 25.7 north and longitude 120.8 west. Fabio's maximum sustained winds were near 30 mph (45 kmh) and weakening. It was still moving to the north at 9 mph (15 kmh) but is expected to turn to the north-northeast.