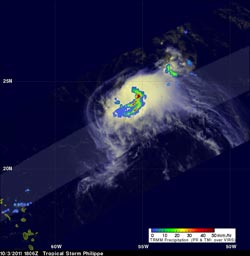 This TRMM image shows the heaviest rainfall in Philippe (2 inches/50 mm per hour) in red, falling in its southeastern quadrant. Moderate to light rainfall appears in green and blue, falling at a rate between .78 to 1.57 inches (20 to 40 mm) per hour. Credit: NASA/SSAI, Hal Pierce <br>

Philippe was still a tropical storm when the TRMM satellite passed above on October 3, 2011 at 1806 UTC (2:06 p.m. EDT) but the National Hurricane Center (NHC) predicts that the storm may become a hurricane in a couple days. TRMM's TMI and Precipitation Radar (PR) data showed that bands of powerful convective thunderstorms were still dropping rain at a rate of over 50mm/hr (~2 inches) in the southeastern quadrant of the storm because wind shear was pushing it there.

Philippe has been battling wind shear from the northwest, as the coldest cloud tops, heaviest rain and frequent lightning have remained on the southeastern side of the storm for the last two days.

At 11 a.m. EDT on Oct. 4, Tropical Storm Philippe's maximum sustained winds were still near 65 mph (as they were when TRMM flew overhead on Oct. 3). However, the National Hurricane Center noted that Philippe may still strengthen and reach hurricane status in the next couple of days. Philippe is still a small storm, about 170 miles in diameter, as tropical storm-force winds extend out 85 miles from the center.

Philippe's center was about 530 miles (850 km) south-southeast of Bermuda, near latitude 25.3 north and longitude 61.3 west. Philippe is moving toward the northwest near 6 mph (9 kmh), but is expected to speed up and turn to the northeast on Thursday, Oct. 6 because of a strong mid-latitude trough approaching it.