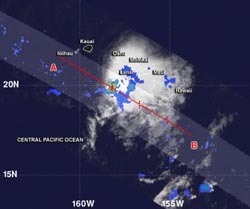 The TRMM satellite flew over Flossie on July 30, 2013, at 07:17 UTC and saw a small area of heavy rain (red) west of the center of circulation. Most of the other rainfall was light (blue) and moderate (green).<br><br>Credit: NASA/SSAI, Hal Pierce<br>

The Tropical Rainfall Measuring Mission, or TRMM, satellite flew over Flossie on July 30 at 07:17 UTC (3:17 a.m. EDT) and saw a small area of heavy rain west of the center of circulation. TRMM data showed that the rest of Flossie's rainfall was light to moderate. TRMM is managed by both NASA and the Japan Aerospace Exploration Agency.

The National Oceanic and Atmospheric Administration's Central Pacific Hurricane Center noted that the depression is moving toward the west-northwest near 18 mph (30 kph) and is expected to continue in that direction for the next two days. Flossie's maximum sustained winds have dropped to near 35 mph (55 kph) and the CPHC forecasts continued weakening over the next two days. Estimated minimum central pressure is 1009 millibars.

Flossie is moving into a somewhat less hostile environment. As TRMM data showed, there is no active convection (rising air forming the thunderstorms that make up the tropical cyclone) remaining near the system center Flossie. Forecasters at CPHC believe that Flossie may be “too far gone” to recover and re-strengthen. Flossie is forecast to remain a depression through 24 hours, become a remnant low in 36 hours, and dissipate by 72 hours.

The CPHC expects gusty winds will likely continue today as Flossie continues moving west-northwest.Locally heavy rainfall is expected to continue through the night-time hours on Tuesday, July 30, local time. This rainfall could cause life-threatening flash floods and mud slides.

Meanwhile, CPHC notes that dangerous high surf will continue to affect east facing shores on July 30. Large surf is expected to continue from Maui to Niihau before subsiding tonight, July 30.