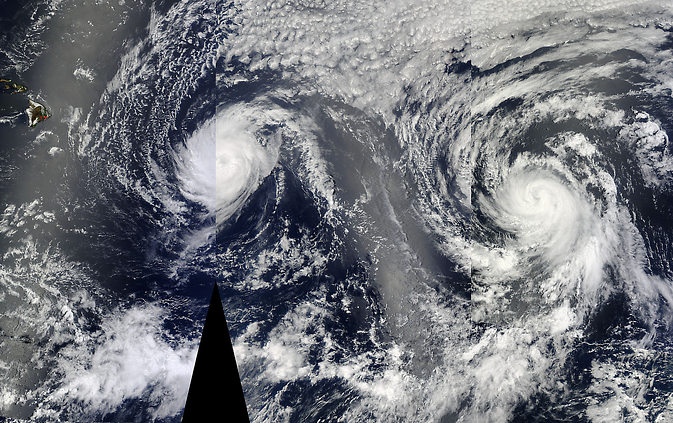 This type of outburst is known as a terrestrial gamma-ray flash (TGF). Produced by the powerful electric fields in thunderstorms, TGFs last only a few thousandths of a second but emit gamma rays that make up the highest-energy naturally-occurring light on Earth. Scientists estimate that, on average, about 1,100 TGFs occur each day.

Fermi's GBM instrument can detect TGFs within about 500 miles (800 km) of the spacecraft, which is too imprecise to definitively associate these flashes with specific storms. In 2012, however, Fermi scientists used lightning location data to show that TGFs also emit strong radio bursts, signals that can pinpoint the flashes with much greater precision.

Lightning emits a broad range of very low frequency (VLF) radio waves, often heard as pop-and-crackle static on AM radio broadcasts. The World Wide Lightning Location Network (WWLLN), a research collaboration operated by the University of Washington in Seattle, uses these radio signals to pinpoint lightning discharges anywhere on the globe to within about 6 miles (10 km).

According to WWLLN data, a lightning-like radio burst occurred near Fermi just 1.89 milliseconds after the spacecraft captured the gamma-ray flash above Julio, then a tropical storm. The timing is so close that the two signals must be related. “As far as I know, a TGF from a tropical storm has never been reported before,” said Michael Briggs, a member of the GBM team at the University of Alabama in Huntsville.

Two days after Julio emitted a gamma-ray flash, NASA's Aqua satellite passed overhead and captured a visible image of the storm that showed it had become more structurally organized.

On August 6 at 22:30 UTC (6:30 p.m. EDT) NASA's Aqua satellite passed over Hurricanes Iselle and Julio approaching Hawaii. The visible image was captured from the Moderate Resolution Imaging Spectroradiometer or MODIS instrument. The hurricane appeared more compact and symmetric. By August 7, the National Hurricane Center noted that Julio's eye had cleared of clouds.

At 5 a.m. EDT (0900 UTC) on August 7, the National Hurricane Center (NHC) noted that Julio's maximum sustained winds had increased to near 100 mph (155 kph). The
NHC noted that some additional strengthening is possible before the storm begins gradually weakening at night and over the weekend of August 9 and 10.

The eye of Hurricane Julio was located near latitude 16.8 north and longitude 134.9 west, about 1,340 miles (2,155 km east of Hilo, Hawaii. Julio is moving toward the west-northwest near 17 mph (28 kph) and this general motion is expected to continue for the next 48 hours. The estimated minimum central pressure is 976 millibars.

The NHC intensity forecast calls for Julio to remain at hurricane strength for the next 2-3 days (through August 9 or 10). Only gradual weakening is anticipated at the end of the forecast period since Julio will be moving over increasingly warmer waters to the north and west of Hawaii.