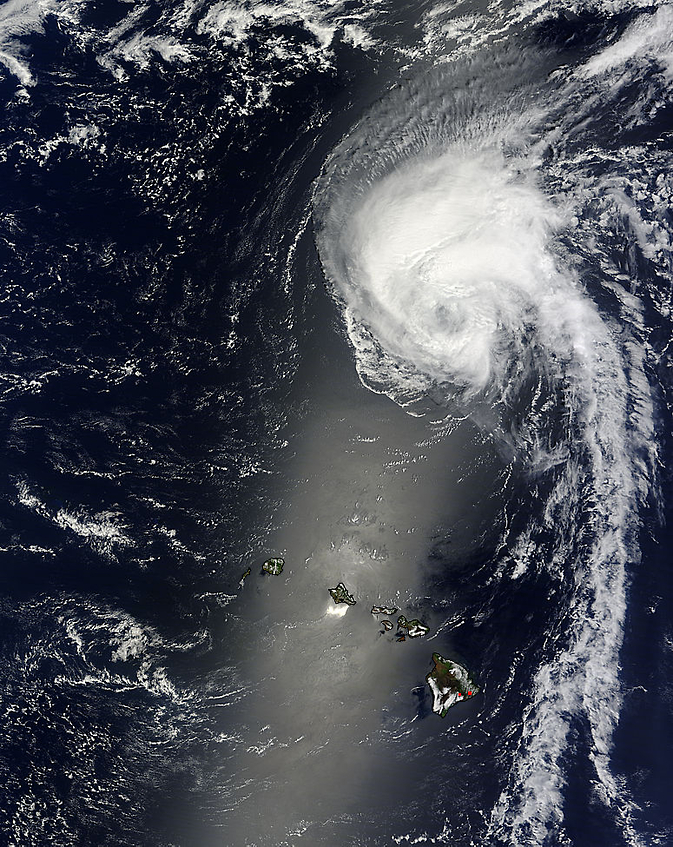 NASA's Terra satellite passed over Julio and saw that the bulk of the clouds and precipitation were being pushed to the34 north of the center as the storm tracked far north of the Hawaiian Islands.

NASA's Terra satellite passed over Julio on August 11 at 21:25 UTC (5:25 p.m. EDT) and the Moderate Resolution Imaging Spectroradiometer or MODIS instrument aboard took a visible picture of the storm.

The MODIS image revealed a circular center, but most of the clouds and showers associated with the storm were pushed north of the center. Drier air, located over the southern quadrant of the storm is sapping the development of thunderstorms.

Julio tracked far enough away from the Hawaiian Islands so that no watches or warnings were generated for the storm.

Julio was moving toward the northwest near 6 mph (9 kph) and NOAA's Central Pacific Hurricane Center (CPHC) expects that motion to continue over the next day before the storm gradually turns north.

Maximum sustained winds were near 65 mph (100 kph) and a slow weakening is forecast over the next two days.

The CPHC expects that cooler waters and increasing wind shear will weaken Julio into a depression by August 14.