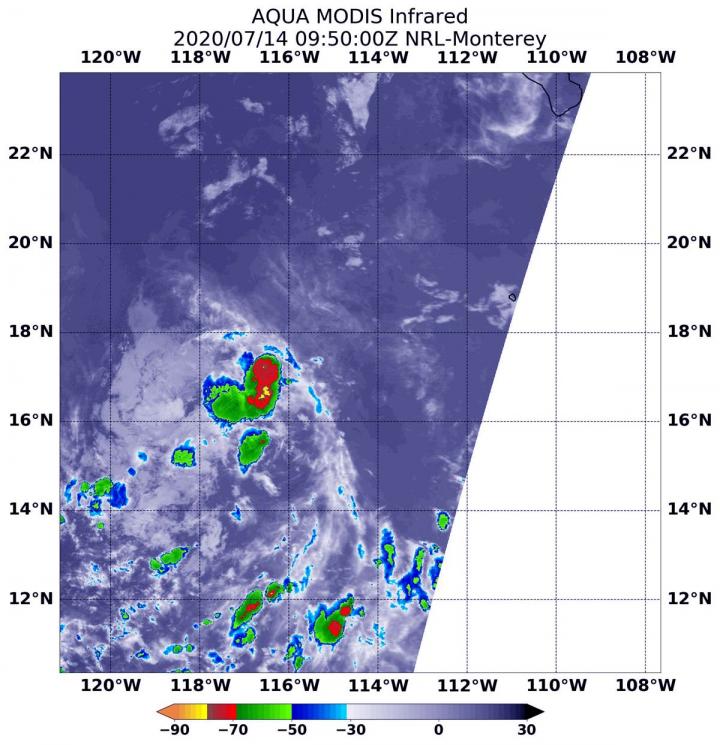 On July 14 at 5:50 a.m. EDT (0950 UTC), the MODIS instrument aboard NASA's Aqua satellite gathered temperature information about Tropical Depression 6E's cloud tops. MODIS found a few small areas of powerful thunderstorms (red) where temperatures were as cold as or colder than minus 70 degrees Fahrenheit (minus 56.6 Celsius). Credit: NASA/NRL

Tropical Depression 6E formed in the Eastern Pacific Ocean by 5 p.m. EDT on July 13 and was located well to the southwest of Baja California Sur, Mexico.

Infrared data provides temperature information, and the strongest thunderstorms that reach high into the atmosphere have the coldest cloud top temperatures.

Aqua found the most powerful thunderstorms in several small, fragmented areas northeast, southeast and southwest of the center of circulation, where temperatures were as cold as or colder than minus 70 degrees Fahrenheit (minus 56.6 Celsius).

At 11 a.m. EDT (1500 UTC) on July 14, the NHC said the center of Tropical Depression Six-E was located near latitude 18.1 degrees north and longitude 116.6 degrees west. 6E is far from land areas and is about 545 miles (880 km) southwest of the southern tip of Baja California, Mexico. The depression is moving toward the west-northwest near 16 mph (26 kph).

NHC forecaster Robbie Berg noted that, “The depression is forecast to reach waters colder than 26 degrees Celsius (78 degrees Fahrenheit) in 12 to 24 hours, which should extinguish the remaining deep convection.”

Tropical cyclones/hurricanes are the most powerful weather events on Earth. NASA's expertise in space and scientific exploration contributes to essential services provided to the American people by other federal agencies, such as hurricane weather forecasting.