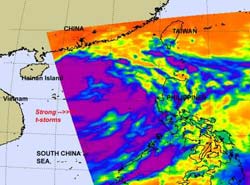 NASA's Aqua satellite passed over the eastern side of Tropical Storm Nock-ten and the AIRS instrument captured this infrared image of the storm's cold cloud tops (purple) and strong thunderstorms on July 28 at 0517 UTC (1:47 a.m. EDT). Hainan Island, China is located to the west and can be seen on the left side of the image. Credit: NASA/JPL, Ed Olsen<br>

Bands of strong thunderstorms that make up tropical storm Nock-ten were visible in an infrared image captured on July 28 by the Atmospheric Infrared Sounder (AIRS) instrument that flies on NASA's Aqua satellite. The colder the cloud tops, the higher the thunderstorms and the stronger they are, and cloud top temperatures over a large area of Nock-ten were colder than -63 Fahrenheit (-52 Celsius) and the cloud tops likely extended into the tropopause. High, strong thunderstorms like those also can generate heavy rainfall, up to 2 inches (50 mm) per hour. Those in Nock-ten's path can expect heavy rainfall, local flooding, gusty winds and rough surf along coastal areas.

AIRS imagery has shown that the convection within Nock-ten has intensified as it moves through the warm waters of the South China Sea. It is expected to strengthen a little more with the warm sea surface temperatures feeding it, and wind shear remaining light.

The Joint Typhoon Warning center forecasters expect that the center of Nock-ten will make landfall over Hainan Island, China before July 29 at 1500 UTC (11 a.m. EDT) and weaken a little as it moves over land. However, once it re-emerges over water in the Gulf of Tonkin, it may strengthen a little before making final landfall in Vietnam.