NASA examines Tropical Storm Nanmadol inside and out 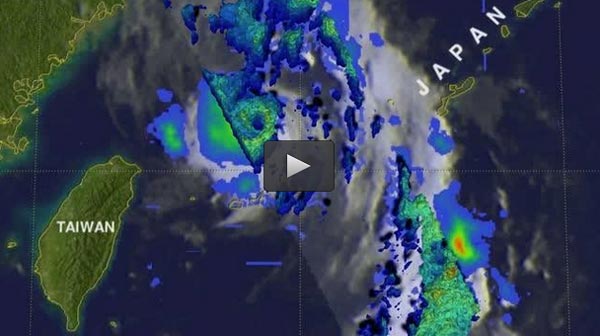 On July 2, NASA/JAXA's GPM Core satellite passed over Nanmadol and found rain was falling at a rate of greater that 184 mm (7.2 inches) per in powerful storms northeast of the storm. GPM found that storm top heights near the center of circulation were reaching altitudes of over 14.4 km (8.9 miles). The tallest storms were seen by GPM in a large feeder band to the southeast of the storm's center where storm top heights were reaching altitudes of over 16.4km (10.2 miles). Credits: NASA/JAXA, Hal Pierce

Before consolidating into the fifth depression of the Northwestern Pacific Ocean's hurricane season, Nanmadol was a low pressure system designated System 99W. That low pressure area developed and was renamed Nanmadol on July 2.

The name comes from an archaeological site adjacent to the eastern shore of the island of Pohnpei, one of the four states in the Federated States of Micronesia. The word means “spaces between” and is a reference to the canals that run through the ruins.

The GPM Core Observatory carries the first space-borne Ku/Ka-band Dual-frequency Precipitation Radar (DPR) and a multi-channel GPM Microwave Imager (GMI). Rainfall within Nanamadol was derived from data collected by GPM's GMI and DPR instruments. Those data indicated that rain was falling at a rate of greater that 184 mm (7.2 inches) per in powerful storms northeast of the storm.

By July 4 at 0200 UTC (July 3 at 10 p.m. EDT), Nanmadol is expected to weaken further as it begins to interact with the rough terrain of Kyushu. The storm is then expected to move east-northeast across Kyushu, Shikoku and Honshu while becoming extra-tropical.