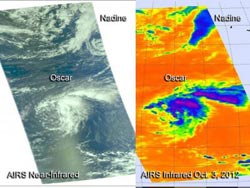 NASA's Aqua satellite passed over both Tropical Storm Nadine and Tropical Storm Oscar on Oct. 3 at 1553 UTC (11:53 a.m. EDT) and captured a near infrared (almost visible) (left) and infrared image (right) of both storms. A cold front (top left) is expected to merge with Nadine.<br><br>Credit: NASA JPL, Ed Olsen<br>

NASA's Aqua satellite passed over both Tropical Storm Nadine and Tropical Depression 15 (TD15) on Oct. 3 at 1553 UTC (11:53 a.m. EDT), before TD15 became Tropical Storm Oscar. While overhead, the Atmospheric Infrared Sounder (AIRS) instrument aboard Aqua captured two different images of both storms. One image was near infrared and almost visible light, while the other was infrared.

The near infrared image on Oct. 3 provided a look at the cloud cover and the cloud top temperatures as well as the sea surface temperatures. Most of the strongest thunderstorms were identified in infrared imagery by the coldest cloud top temperatures (meaning that they are higher in the atmosphere where temperatures are colder). Strongest storms in Oscar were located east of the center of circulation. That's because wind shear was pushing them away from the center, and that wind shear would continue to batter the storm again on Oct. 4.

Nadine wasn't even showing any high, powerful thunderstorms. Although the circulation of Nadine could be seen on the near-infrared, almost visible image, there were no strong storms around the circulation center.

Tropical Depression 15 strengthened into Tropical Storm Oscar at 11 p.m. EDT on Oct. 3, 2012. On Oct. 4, Oscar's maximum sustained winds were near 40 mph (65 kph). The National Hurricane Center doesn't expect much change in Oscar in the near term, before things get worse for the storm. Oscar's center was 1,245 miles 2,005 km west-northwest of the Cape Verde Islands, near latitude 20.0 North and longitude 42.5 West. Oscar is moving toward the north-northwest near 9 mph (kph) and is expected to turn north, followed by a turn to the northeast on Oct. 5.

Infrared imagery showed that although strong convection and thunderstorms have increased in intensity and coverage during the morning on Oct. 4, the bulk of them are east of the center because of westerly wind shear between 15 and 20 knots. The storm was not symmetric as a result of the wind shear. A storm needs to be symmetric to strengthen, and the wind shear is preventing that from occurring. As a result, the National Hurricane Center expects Oscar to become an open trough (elongated area) of low pressure by late Friday, Oct. 5.

Tropical Storm Nadine Being Chased by a Cold Front

Tropical Storm Nadine is becoming associated with a nearby cold front that appeared on near-infrared and infrared imagery as a strong wedge of clouds with cold cloud top temperatures. That front was moving toward Nadine from the northwest.

In the meantime, a Tropical Storm Warning for the Azores was still in effect. At 8 a.m. EDT on Oct. 4, Tropical Storm Nadine had maximum sustained winds near 45 mph (75 kph). Nadine was located near latitude 39.0 North and longitude 27.2 West, just 20 miles (30 km) north-northwest of Lajes in the Azores. Nadine is moving to the northeast at 23 mph (37kph) and is losing tropical characteristics. The National Hurricane Center expects Nadine to become post-tropical later in the day, on Oct. 4, Thursday.