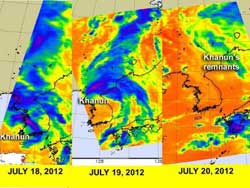 ... of the time series of infrared imagery from the AIRS instrument on NASA's Aqua satellite showing the progress of Tropical Depression Khanun before, during and after landfall on July 18, 19 and 20. Purple areas indicate coldest cloud top temperatures, strongest storms and heaviest rainfall.<br><br>Credit: Credit: NASA JPL, Ed Olsen<br>

NASA's Aqua satellite passed over Khanun on July 18, 19 and 20 and tracked the northeastern progression of the tropical cyclone after it made landfall. On Wednesday, July 18 at 1659 UTC (12:59 p.m. EDT/U.S.), Tropical Depression Khanun's center was still in the Yellow Sea (west of South Korea).

At that time, the Atmospheric Infrared Sounder (AIRS) instrument onboard NASA's Aqua satellite saw a band of thunderstorms with cloud top temperatures colder than 220 kelvin (-63.6 F/-53.1C) over western South Korea, bringing heavy rainfall. A larger area of thunderstorms with cloud top temperatures as cold as -63F/-53C were over western North Korea at that time, dropping moderate rainfall.

Tropical Depression Khanun came ashore in western South Korea, bringing heavy rainfall with it on Thursday, July 19 as it moved in a north-northeasterly direction toward North Korea and northeastern China. On July 19 at 0405 UTC (12:05 a.m. EDT/U.S.), the heaviest rainfall and strongest thunderstorms appeared to be over the Kangnam Mountains in northern North Korea that also border eastern China. The Kangnam Mountains lie west of the Rangrim Mountains.

Although the center of Khanun's remnants moved into the Sea of Japan, it was bringing some scattered showers and thunderstorms to a few areas in northeastern China on July 20. NASA's Aqua satellite passed over the region on July 20 at 0447 UTC (12:47 a.m. EDT) and showed some scattered showers moving east into Khabarovsk Krai, Russia, a federal subject of Russia. Khunan's remnants are expected to dissipate today.