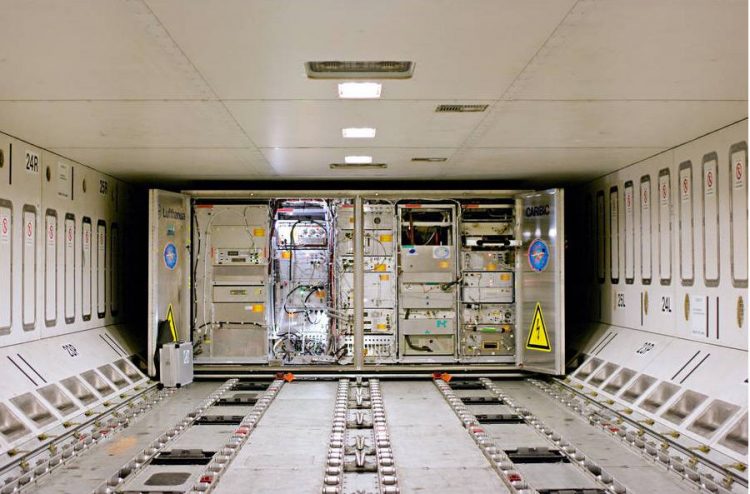 The Max Planck Institute for Chemistry deploys an airfreight container with automated scientific apparatus which are connected to an air and particle (aerosol) inlet underneath the aircraft. The Institute uses for the measurements an Airbus A340-600 from Lufthansa. Photo: Stefan Weber

Hydroxyl radicals (OH) keep our atmosphere clean. They react away toxic gases such as carbon monoxide (CO), and slow climate warming by removing greenhouse gases like methane (CH4). In some parts of the atmosphere, chlorine radicals (Cl) can also help this purification process, for example in the stratosphere.

Therefore, scientists are very interested to know how the concentrations of these natural cleaning agents vary over time. Unfortunately, both radicals are extremely difficult to measure directly, as they are highly reactive and present at only extremely low concentrations.

Researchers from the Max Planck Institute for Chemistry in Mainz have now developed a new method to derive both atmospheric OH and Cl concentrations over long periods by using volatile organic compounds. In a paper published recently in Nature Climate and Atmospheric Science, they show how these radicals have varied between 2008 and 2015.

These long-lived gases were measured at 10-12 kilometer height from a specially equipped Lufthansa passenger jet (IAGOS-CARIBIC*), and combined with measurements made at the ground using the NOAA-Earth System Research Laboratory network. SF6, whose concentration is steadily increasing in the atmosphere since the molecule is not depleted, defined how long it has been between the air leaving the surface and being measured from the plane.

Once the scientists knew the “age” of an air parcel, they could estimate how much of a specific compound is oxidized from the moment it left the surface until the measurement. Knowing that CH3Cl reacts mostly with OH radicals and CH4 with both OH and Cl radicals, the Max Planck scientists determined the initial and final concentrations of these gases, allowing the cleaning agent concentrations to be calculated. “One of the nice things about this approach is that the values come from the data directly, without using a complex global model,” says Mengze Li, PhD student at Max Planck Institute for Chemistry.

The concentration of tropospheric OH was found to be on average six times larger than in the lower stratosphere, while the amount of stratospheric Cl radicals was ten times lower than OH. No trend in the data appeared over the seven-year timespan of the measurements. “This stability is reassuring, as strong variations would make the air composition very unstable,” explains Williams. This new method will be useful in tracking future largescale changes in radical concentrations that may occur for example from volcanic eruptions.

* CARIBIC (Civil Aircraft for the regular Investigation of the atmosphere Based on an Instrument Container) is an innovative scientific project to study and monitor important chemical and physical processes in the Earth´s atmosphere. Detailed and extensive measurements are made during long distance flights. The Max Planck Institute for Chemistry deploys an airfreight container with automated scientific apparatus which are connected to an air and particle (aerosol) inlet underneath the aircraft. The Institute uses for the measurements an Airbus A340-600 from Lufthansa.