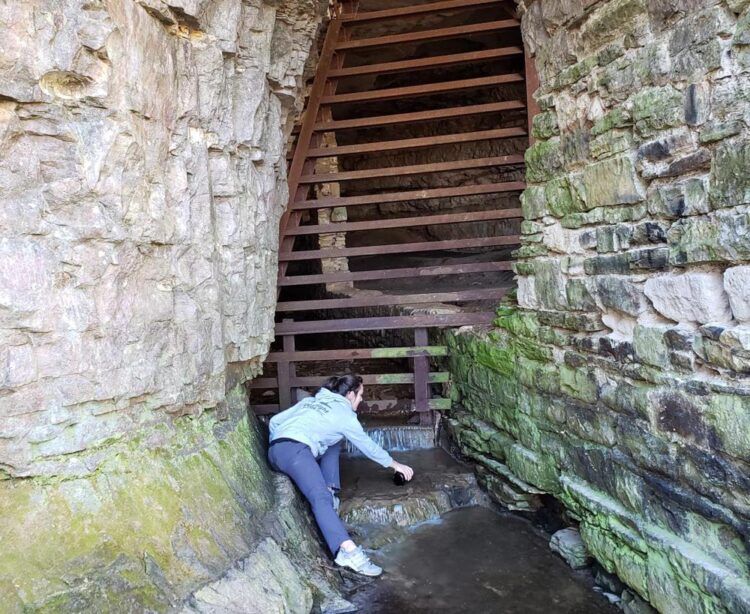 Teresa Baraza Piazuelo samples groundwater as it exits the mouth of Cliff Cave, outside of St. Louis, Missouri, USA, during low/normal flow in February 2020. The cave is on Osage and Illini homelands, and is a Sacred Site for the Osage nation.
Credit: Teresa Baraza Piazuelo

Presentation at the 2020 Annual Meeting of the Geological Society of America.

Microplastics (plastics <5mm) and their negative health impacts have been studied in oceans, rivers, and even soils, and scientists are beginning to grapple with the myriad human health impacts their presence might have. One understudied, but critical, link in the cycle is groundwater, which is often a source of drinking water.

At the Geological Society of America’s 2020 Annual Meeting today at 1:30, Teresa Baraza Piazuelo, a Ph.D. candidate at Saint Louis University, will help fill that knowledge gap by presenting new research on groundwater microplastics in a karst aquifer. “There hasn’t been that much research looking at [micro]plastics and groundwater,” Baraza says. “It’s a very new topic. There’s been a boom of research on microplastics in the ocean, even in soils… but to fully understand something, you have to explore it in all its aspects.”

Microplastics pose multiple physical and chemical risks to the ecosystems where they’re present, and those risks are exacerbated by plastics’ longevity in natural environments. “Since they’re plastic, they’re very durable,” Baraza says, “which is why plastic is great. But it doesn’t degrade easily.” Microplastics’ ability to linger in their environments for decades or longer likely has cumulative detrimental effects on both the organisms and quality of the ecosystem. Their chemical threat stems largely from their ability to transport harmful compounds on their surfaces; when organisms at the base of the food chain ingest microplastics, they ingest the toxins, too. As larger organisms consume the smaller ones, the toxins can build up (a process called bioaccumulation), eventually resulting in responses like organ dysfunction, genetic mutation, or death. “Cave ecosystems are known for being super fragile to begin with,” she explains. “All the cave organisms — salamanders, blind fish — are sensitive, so any contaminants that are introduced could damage those ecosystems.”

Groundwater can stay in the same aquifer for tens to hundreds of years, or even longer. Combining that long residence time with plastics’ resistance to degradation means that those chemical effects could effectively build up in the water and in any organisms within it, increasing the likelihood of toxic bioaccumulation. Together, these could result in long-term contamination of water sources with poorly-understood health effects and ecosystem damage.

So far, they’ve found that while microplastics do increase in groundwater during a flood event, there’s also a second peak in microplastics after the flooding has begun to wane. Their explanation is that there are two sources of microplastics for groundwater: those that are already in the subsurface, and those that are newly delivered from the surface. “Finding so much plastic later on in the flood, thinking that it could be coming from the surface… is important to understand the sourcing of microplastics in the groundwater,” Baraza says. “Knowing where the plastic is coming from could help mitigate future contamination.”

Their current flood results are only based on one event, but Baraza will continue sampling through the rest of the year — weather permitting. “Flood sampling is hard,” she says, “especially in St. Louis, where the weather is so unpredictable. Sometimes we think it’s going to rain and then it doesn’t rain, and then sometimes it doesn’t seem like it’s going to rain, but it does… we caught a flood a week ago, and we are expecting to catch a couple more floods.” The effort is worth it to determine if flooding events — which are becoming more common under climate change — are highly-effective deliverers of microplastics in groundwater reservoirs.

The Geological Society of America, founded in 1888, is a scientific society with over 20,000 members from academia, government, and industry in more than 100 countries. Through its meetings, publications, and programs, GSA enhances the professional growth of its members and promotes the geosciences in the service of humankind. Headquartered in Boulder, Colorado, GSA encourages cooperative research among earth, life, planetary, and social scientists, fosters public dialogue on geoscience issues, and supports all levels of earth-science education.