Home / Earth Sciences / Mangroves and their significance for climate protection
26.03.2019

Mangroves and their significance for climate protection 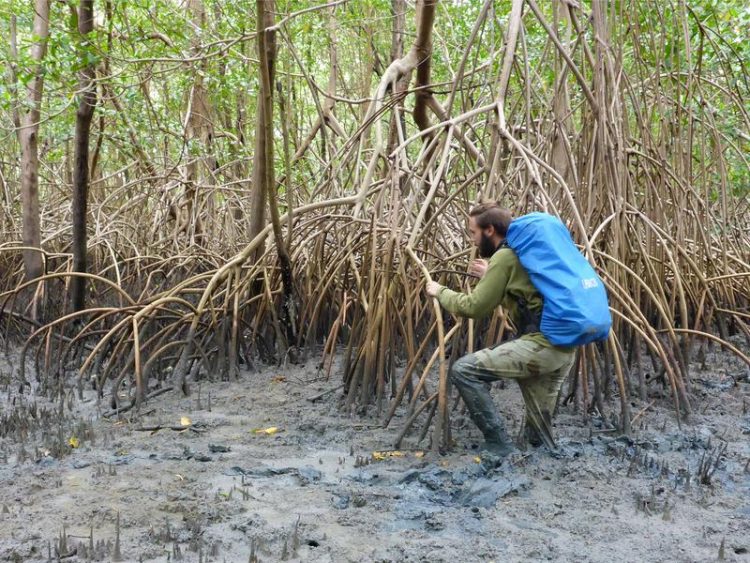 High concentrations of CO2 in the atmosphere and the associated global warming are increasing the awareness that it is imperative to preserve the carbon sinks of our planet referring to ecosystems that store particularly large amounts of carbon, such as the oceans or peat swamps on land.

Mangroves also help to protect climate: they are highly efficient carbon stores. As forests at the transition between land and sea, they are exposed to the tides and are regularly flooded. The thicket of their stilts and aerial roots, however, retains the sediment in the forest floor and prevents it from being washed out.

Enormous amounts of organic material accumulate in the silt: fallen leaves, dead wood and roots, fish and crab excreta, and deposited material from rivers and tides. The mud layers can be several metres thick.

In order to assess the efficiency of mangroves as carbon reservoirs, carbon stocks in the soil are being measured. In 2011, US scientists, for example, have determined the amount of carbon present in sediment: they found an average of more than 1,000 tons per hectare, four times as much as in tropical rainforests. Overall, the researchers estimated that between four and 20 billion tons of carbon are stored in the tidal forests.

“However, the value of the carbon stock in the sediment alone is misleading when it comes to the actual performance of a mangrove forest as a sink, because the organic material can have accumulated in the soil in 10, 100 or 1,000 years,” comments biogeochemist Tim Jennerjahn of ZMT in Bremen, “The value only indicates how much carbon could be released if the mangroves were destroyed. But if we want to assess how much CO2 the mangrove forests currently absorb from the atmosphere, we have to calculate the carbon accumulation rates.”

Jennerjahn and his team investigated mangrove forests in Indonesia – on Java, Kalimantan and one of the Thousand Islands. They extracted sediment cores, dated them and determined the carbon accumulation rates per hectare and year. For their calculations, they also considered the aboveground biomass of the forest.

In the course of their investigations it became increasingly clear that the figures for the carbon stock on the one hand and the carbon accumulation rates on the other hand can differ considerably due to environmental conditions. In the east of the Segara Anakan lagoon on Java, for example, the mangrove forest directly borders the lagoon.

In addition to the biomass of the forest, the tides flush a lot of organic material into the mangrove. A high carbon stock of 450 tons per hectare is opposed by a low carbon accumulation rate of 20 tons.

In the west of the lagoon, on the other hand, the mangrove forest borders a river estuary. Especially during the monsoon season, the water masses of the Citanduy River transport large quantities of sediment from the volcanic hinterland and deposit it in the mangrove forest. The high sand content leads to a relatively low carbon stock of less than 200 tonnes per hectare, while the carbon accumulation rate is ten times higher than in the eastern part of the lagoon.

For countries such as Indonesia, India or Bangladesh, mangroves could play an important role in global emissions trading in the future. In the United Nations REDD Programme for “Reducing Emissions from Deforestation and Destructive Forest Use”, an instrument of international climate protection policy, mangroves are increasingly being taken into account. “In order to assess the relevance of mangroves as carbon sinks, it is therefore extremely important to have reliable figures,” says Jennerjahn.