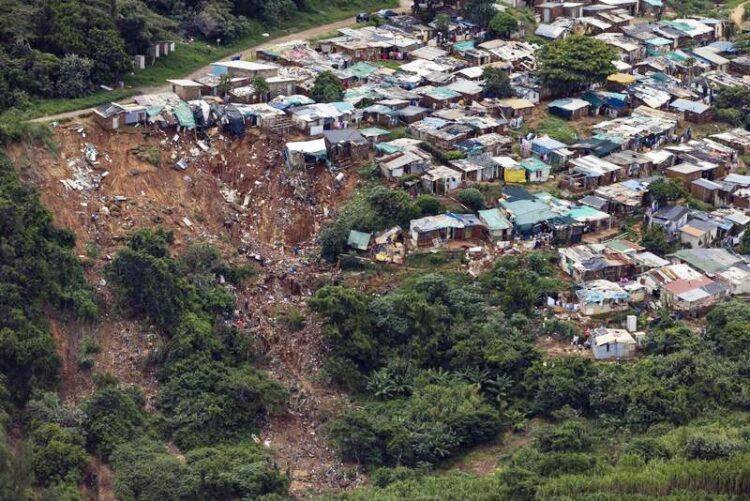 A landslide in the Durban area of South Africa, triggered by the April 2022 rainfall event.
Credit: Kierran Allen

In a comment recently published in “Nature”, Dr. Ugur Öztürk and his colleagues at the University of Potsdam, the University of Bristol and the Potsdam Institute for Climate Impact Research claim that more settlements will suffer from landslides in the future as climate change and urban sprawl are destabilizing slopes in the tropics.

Over the last fifty years, disasters caused by landslides and floods have become ten times more frequent, despite landslides being significantly underreported in global databases. Worldwide, 4500 people are killed on average each year already, and landslide risk is set to escalate even further in the future under two increasing trends – climate change and urbanization. More than 80% of fatal landslides occur in the tropics, mainly triggered by heavy rainfall during cyclones and monsoons.

The rapid pace of urbanization in many tropical countries, especially low and lower-middle-income nations, will put more people in the path of landslides. “Human modifications to hillslides make them more likely to fail” says Dr. Ugur Öztürk, civil engineer and leading author of the manuscript. “Cutting into hillslopes, for terracing or to make space for houses, makes them steeper and thus more unstable. Removing plant cover and adding water through poor drainage or leaking pipes also make landslides more likely. So does mining and construction of infrastructure such as roads.”

Current landslide risk assessment approaches based on correlations found in historical data are insufficient where landslide records are poor or even missing, as common in many low and lower-middle-income countries. Quantifying the interactions between the natural environment, changing rainfall patterns, and informal urbanization is increasingly possible thanks to advances in remote sensing, data gathering and modelling. The study combined data and models of urban landslides and climate change to identify likely future hotspots of landslide risk in five representative cities across the tropics: Freetown in Sierra Leone, Antipolo and Baguio in the Philippines, Port au Prince in Haiti, and Bukavu in the Democratic Republic of Congo.
Prof. Thorsten Wagener, a co-author of the study, states: “Urbanization and climate change push the poorest into harm’s way. We currently have a window of opportunity to act before this risk increases significantly. The path we propose enables researchers, policymakers and landslide practitioners to come together to identify hot spots early and to devise policies that can prevent the worst.”

Image: A landslide in the Durban area of South Africa, triggered by the April 2022 rainfall event. Image Credit: Kierran Allen.