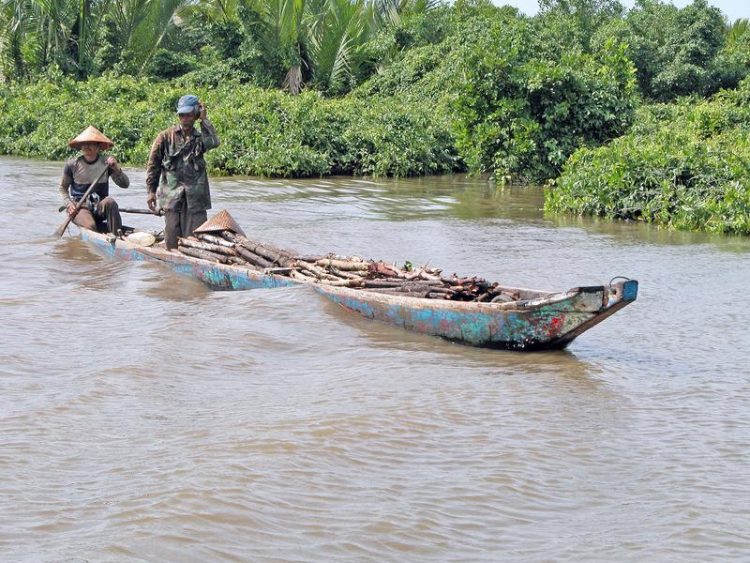 High concentrations of CO2 in the atmosphere and the associated global warming are making us more and more aware of how imperative it is to preserve the carbon sinks of our planet. These are ecosystems that store a great deal of carbon.

Natural, highly efficient carbon sinks include the oceans, vegetated coastal habitats such as mangrove forests and seagrass meadows, and moors and peat swamps on land.

Scientists from the Leibniz Centre for Tropical Marine Research (ZMT) and the University of Göttingen are now focusing on another ecosystem that plays an extremely important role as a carbon reservoir: Lagoons.

With its extensive mangrove and peat forests, Southeast Asia is considered a hotspot of natural carbon sinks. On the Indonesian island of Java, the team studied the Segara Anakan Lagoon in the south of the island, which is surrounded by the largest mangrove forest in Java and supplied by the Citanduy River with inputs from the hinterland.

With the help of a drill core from the sediment of the lagoon and the pollen and spores stored therein as well as the contained carbon and nitrogen and further elements the scientists were able to reconstruct the development of the lagoon over the last 400 years.

Thus it was possible to follow the influence of climate development and land use in the adjacent regions on the lagoon as well as its importance as a carbon reservoir.

Soil erosion plays an important role here. Mangroves are highly effective carbon sinks because the branched roots of the trees retain the sediment with its large amounts of organic material.

However, as the investigation of the drill core showed, especially in rainy climate periods abundant mangrove sediments were washed into the lagoon. The local population uses the mangrove wood for their own needs and cuts large gaps into the forest, which further increases soil erosion.

In addition, the river Citanduy, which discharges into the lagoon, washes sediment masses from the hinterland into it. In the calm water of the lagoon, which has little exchange with the open sea, this load of sediment and organic matter is deposited on the bottom. Unlike in the open ocean, only a small part of the organic material is decomposed and released into the atmosphere as CO2.

In the last century, the deposits of the material that the river carries have increased significantly. This is a consequence of developments in the hinterland, where the original forest vegetation was increasingly displaced by agriculture.

Both farmers and state institutions managed the soil in a less sustainable way and without regard to erosion damage. The practice of terracing slopes also led to extensive sediment inputs into the lagoon.

“For the study we used data from climatic and ecological changes as well as social and political changes in land use around the lagoon”, explains Dr. Tim Jennerjahn, biogeochemist at the ZMT and one of the authors of the publication. “Lagoons have become catch basins for man-made environmental damage which would lead to a further increase in the greenhouse gas CO2.”

Blessing and disaster are close together here. Lagoons can be found on 13% of the world's coasts. But all over the world they are slowly silting up and at some point will not be able to fulfil their function as carbon sinks any more. This also applies to the Segara Anakan Lagoon, which today has only a quarter of the extent measured in 1860 and has been shrinking rapidly since the 1960s with an annual loss of 70 hectares.

The study was made possible by the bilateral SPICE programme (Science for the Protection of Indonesian Coastal Ecosystems), which has been funded by the German Federal Ministry of Education and Research for many years.