IOW starts with RV SONNE into the New Year 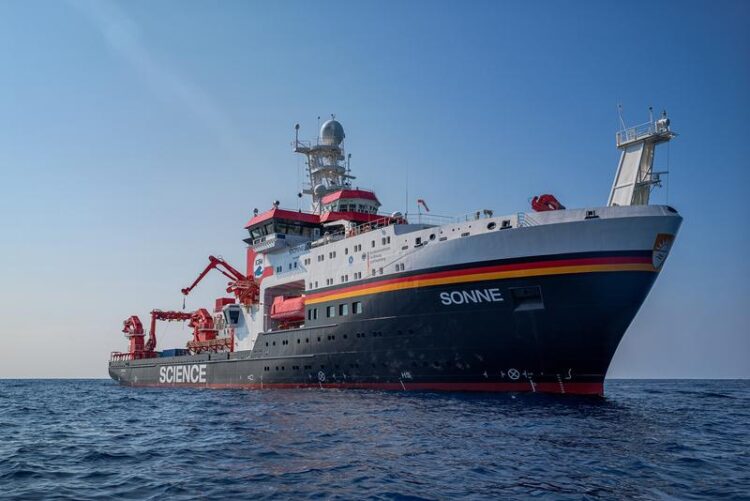 The current SONNE expedition focuses on human-induced pollutants in the sea on the one hand; on the other hand, the effects of oxygen-depleted conditions in the water column on biogeochemical cycles are investigated.
R. Prien / IOW

On December 27, 2022, Germany’s second largest research vessel, the “SONNE”, will set off for several months on a research cruise to the East Pacific shelf regions of Central and South America. Scientists from the Leibniz Institute for Baltic Sea Research Warnemünde (IOW) will be in charge of two of the three expedition legs. The first examines human-induced trace substances and pollutants in the sea; the second focuses on the impact of oxygen-depleted conditions in the water column on sea life and on biogeochemical cycles.

Between the expedition’s starting port, Port Hueneme in the USA, and the Chilean destination port of the first expedition leg, Talcahuano, lies a transit route of almost 10,000 kilometres through open sea. It leads along a coastline that is characterised by increasing population growth, which also affects the shelf sea areas. “For us, this is an ideal opportunity to investigate various interactions between land and ocean – both, natural processes and those, for which humans are responsible,” says Detlef Schulz-Bull, head of the Marine Chemistry Section at the IOW and chief scientist of the first cruise leg.

Close-meshed sampling of the surface water along the entire route will provide information about the pollution that is released into the sea by rivers and the atmosphere, for example excess nutrients from agriculture, organic pollutants, microplastics, pharmaceuticals and hormones. “We also want to gain a better understanding of climate change effects on the marine ecosystems there, for example through changes in water stratification and currents,” explains marine chemist Schulz-Bull, who will be accompanied by an 11-member team of IOW researchers on this 23-day leg of the cruise. The ultimate goal is to assess the risks posed to the immediate coastal areas by environmental pollution and population growth, concludes the chief scientist about the first part of the expedition.

Heide Schulz-Vogt, deputy IOW director and geomicrobiologist, will be in charge of the second, 31-day leg of the cruise. She and her scientific team, which includes IOW experts as well as researchers from the Chilean University of Concepción, the Alfred Wegener Institute Helmholtz Centre for Polar and Marine Research and the Institute for Chemistry and Biology of the Sea, will study the effects of oxygen-depleted areas in the middle of the water column. “Our expedition leg takes us to two very different study areas, where anoxia, that is oxygen-depleted or even oxygen-free zones, occurs either periodically or permanently in the middle of the open water column due to natural processes. This is a very good opportunity to study the influence of anoxia on sea life, the marine food web and on various biogeochemical transformation processes,” explains Schulz-Vogt.

The target areas are, on the one hand, the shelf area off the Chilean city of Concepción with its 1 million inhabitants, where wind-induced upwelling regularly transports oxygen-depleted water from the depth to the surface, and, on the other hand, a fjord near the southern tip of Chile, Golfo Almirante Montt, which is largely untouched by human influence but nevertheless anoxic. “Anoxia is also a ‘standard feature’ of the Baltic Sea, so to speak. There, it usually occurs in deep water or directly above the seabed, is caused in no small part by human activities and affects the ecology of our semi-enclosed sea in many ways. It will therefore be exciting to compare the different systems and find out, which patterns correspond and where there are fundamental differences,” the chief scientist continues.

Furthermore, a third study area will be explored, the Canal Concepción / Canal Wide / Seno Eyre fjord system, which is located a little further north and also belongs to Patagonia. “At study areas 2 and 3, we want to find out how these two very different Patagonian fjord regions developed after the last ice age. How did changes in current patterns of the southeast Pacific affect them? How did the post-glacial sea level rise, the changing regional glacier dynamics and the uplift of the land influenced them?” Schulz-Vogt explains the second research focus of the expedition leg that she is responsible for.

To reconstruct the paleo-environmental conditions in the two Patagonian fjord systems, the scientific crew will make high-resolution measurements of oceanographic conditions and take sediment cores, which are to be analysed with various paleo-geological methods. “Such a look back into the past many thousand years with its climate-induced environmental changes also helps us to assess what the future may have in store for us if we humans – in a much shorter time – cause climatic changes,” concludes Heide Schulz-Vogt.

The 37-member expedition team of the second leg will be on board from January 21 to February 21, 2023 and will leave the ship at Talcahuano, Chile. Then the GEOMAR Helmholtz Centre for Ocean Research Kiel will take over the cruise lead for the last leg of the SONNE expedition to conduct various investigations in the field of plate tectonics and earthquake research off the northern Chilean coast.

The IOW is a member of the Leibniz Association that connects 97 independent research institutions that range in focus from natural, engineering and environmental sciences to economics, spatial and social sciences and the humanities. The institutes are jointly financed at the state and national levels. The Leibniz Institutes employ a total of 20,000 people, of whom 10,000 are scientists. The total budget of the institutes is 1.9 billion Euros. http://www.leibniz-association.eu