Influence of increasing carbon dioxide levels on the seabed 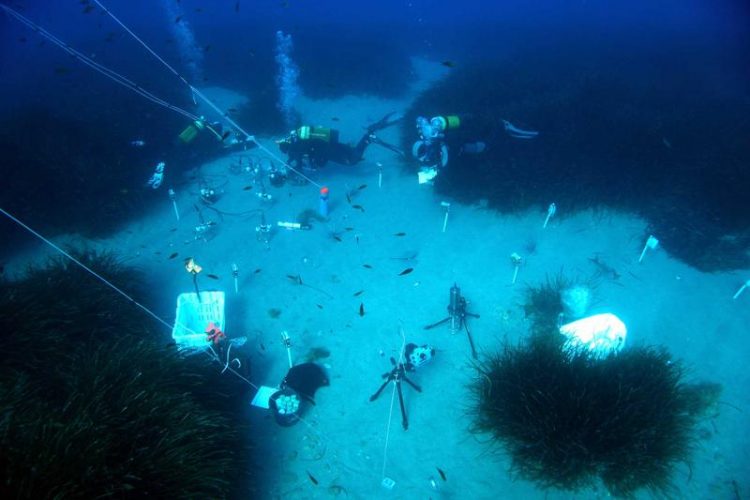 The seafloor as a natural laboratory: Divers at work. HYDRA/C. Lott

Day-in, day-out, we release nearly 100 million tons of carbon dioxide (CO2) into the atmosphere. One possible measure against steadily increasing greenhouse gases is known as CCS (carbon capture and storage): Here, the carbon dioxide is captured, preferably directly at the power plant, and subsequently stored deep in the ground or beneath the seabed.

However, this method poses the risk of reservoirs leaking and allowing carbon dioxide to escape from the ground into the environment. The European research project ECO2, coordinated at GEOMAR Helmholtz Centre for Ocean Research Kiel, addresses the question of how marine ecosystems react to such CO2-leaks.

The field study of an international group of researchers headed by Massimiliano Molari from the Max Planck Institute for Marine Microbiology in Bremen and Katja Guilini from the University of Ghent in Belgium, now published in Science Advances, reveals how leaking CO2 affects the seabed habitat and its inhabitants.

For their study, the researchers visited natural leaks of CO2 in the sandy seabed off the coast of Sicily. They compared the local ecosystem with locations without CO2-venting. In addition, they exchanged sand between sites with and without CO2-venting in order to study how the bottom-dwellers respond and if they can adapt. Their conclusion: Increased CO2 levels drastically alter the ecosystem.

“Most of the animals inhabiting the site disappeared due to the effect of the leaking CO2”, Massimiliano Molari reports. “The functioning of the ecosystem was also disrupted – and what’s more, long-term. Even a year after the CO2-vented sediment had been transported to undisturbed sites, its typical sandy sediment community had not established.”

The researchers report the following details:

“A leak in a carbon storage system beneath the sea fundamentally alters the chemistry of sandy seabeds and subsequently the function of the entire ecosystem”, Molari summarizes. “That is, there is a considerable risk that a carbon dioxide leak will harm the local ecosystem. These carbon dioxide storage systems can nevertheless globally reduce the impact of climate change.”

For the first time, this current study delivers a “holistic” view of the effects of increasing CO2 concentrations on the seafloor. It considers both biological and biogeochemical processes and different levels of the food chain, from microbes to large invertebrate animals.

CCS facilities are already in operation, for example off the Norwegian coast. Within the European Union, CCS is considered a key technology for reducing greenhouse gas emissions. “Our results clearly reveal that the site selection and planning of carbon storage systems beneath the seabed also demand a detailed study of the inhabitants and their ecosystem in order to minimize harm”, emphasizes principal investigator Antje Boetius. „Having said that, global marine protection also includes taking measures against the still high CO2-emissions.“

or the press office