In the ocean's twilight zone, tiny organisms may have giant effect on Earth's carbon cycle 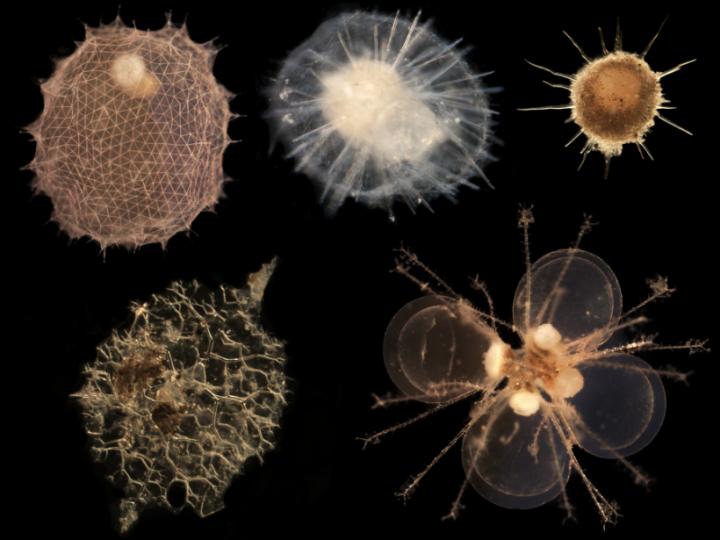 Stukel and his team found that hordes of microorganisms called phaeodarians, depicted above, could be playing an outsized role in the global carbon cycle. Credit: Mike Stukel

In the area 100 to 1,000 meters below the ocean's surface — dubbed the twilight zone because of its largely impenetrable darkness — scientists found that tiny organisms called phaeodarians are consuming sinking, carbon-rich particles before they settle on the seabed, where they would otherwise be stored and sequestered from the atmosphere for millennia.

This discovery, researchers suggest, could indicate the need for a re-evaluation of how carbon circulates throughout the ocean, and a new appraisal of the role these microorganisms might play in Earth's shifting climate.

The findings were published in the journal Limnology and Oceanography.

Lead researcher and FSU Assistant Professor of Oceanography Mike Stukel, who conducted the study with the California Current Ecosystem Long-Term Ecological Research program, investigates the biological pump — the process by which carbon is transported from the surface to the deep ocean.

The only way the ocean experiences a net uptake of carbon dioxide from the atmosphere is if the organic carbon at the surface is transported to the deep ocean, usually in the form of sinking particles.

Particles can sink from the surface ocean for any number of reasons. Dead organisms, fecal matter or amalgamated packages of organic particles are all common vehicles for carbon transport. Diatoms, a type of abundant phytoplankton that perform roughly a quarter of the world's photosynthesis, produce glass-like silica shells that make them substantially denser than the water, causing them to quickly sink.

If these sinking particles were to reach the deep ocean unobstructed, their carbon would be withheld from the atmosphere for hundreds of years. But, as Stukel and his team found, that's not always the case.

Using an advanced camera system that allowed researchers to identify organisms as small as 500 microns (half the thickness of a dime), the team discovered a profusion of microorganisms — far more than they expected — in the crucial ocean twilight zone. Their major question: What were the roles of these organisms, and phaeodarians specifically, in consuming sinking particles?

“By quantifying how many were there and then quantifying the proportion of particles they would be intercepting, we were able to calculate that they could be consuming as much as about 20 percent of the particles sinking out of the surface layer,” Stukel said. “And this was just for one particular family of phaeodarians, called aulosphaeridae.”

When sinking particles are consumed, those particles are necessarily prevented from reaching the deep ocean. The notion that one group of microorganisms could be consuming 20 percent of the carbon-rich particles sinking from the surface waters of this limited study area, Stukel said, suggests that microorganisms around the world could be playing a far more outsized role in the carbon cycle than scientists previously believed.

While at some points aulosphaeridae would be so abundant as to consume up to 30 percent of sinking particles, other times the organisms were barely present at all. Better understanding this variability in abundance of aulosphaeridae and similar organisms can help researchers like Stukel more accurately predict how the biological pump might evolve in the future.

“Our ability to understand how these things will change is important in understanding how the global carbon cycle is going to shift,” Stukel said. “We need to learn what's going on in the rest of the world, and we need to know what causes these huge changes from when these organisms are a really dominant player to when they're a marginal player.”

Tristan Biard and Mark D. Ohman from the Scripps Institution of Oceanography at the University of California, San Diego also contributed to this research, along with Jeffrey Krause from the Dauphin Island Sea Lab and the University of South Alabama. The study was funded by the National Science Foundation.