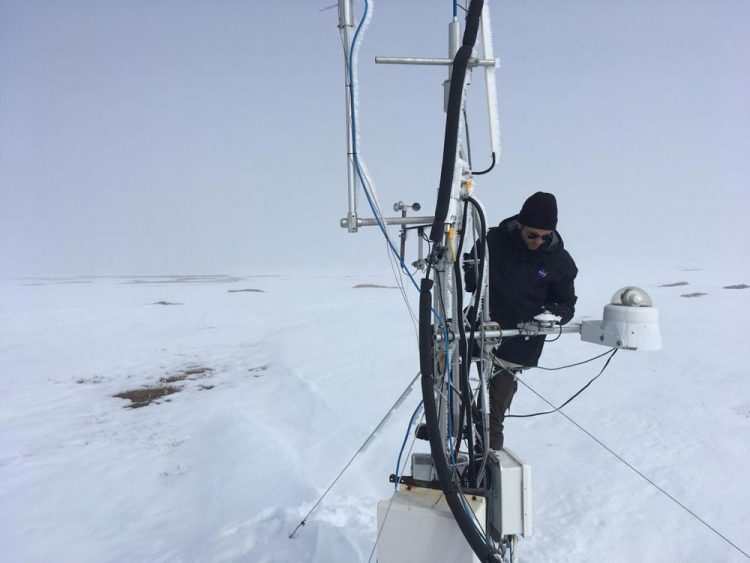 Studies have shown the Arctic is warming roughly twice as fast as the rest of the world, and its soil holds twice the amount of carbon dioxide as the atmosphere.

This is in addition to trapped carbon escaping from the soil, which means an acceleration in warming that is not quite accounted for in current measurement techniques.

The cold season is an essential component of the annual carbon balance, and it was assumed to have a negligible impact on carbon production.

By analyzing soil core samples, what they found was that it wasn't just trapped greenhouse gases that were escaping but also likely increasing fresh production of carbon during the spring thaw.

Published June 30 in Global Change Biology, their study discovered that cold thaw accounts for nearly half of carbon emissions which can offset the summer uptake or absorption of carbon dioxide by vegetation. Their findings fill a gap in data that has long existed because harsh winters and springs made the Arctic difficult to access to conduct studies.

“Earlier we didn't have this data, but now that we do, we are seeing that these ecosystems are rapidly warming,” Arndt said. “Many models already predict the Arctic will turn into a CO2 source, but they may be underestimating the size of the source if this spring process is not taken into account.”

Arndt, first author of the paper, began visiting Utqiagvik in summer 2016 to maintain equipment set up by SDSU ecologist Walter Oechel, who has been working for nearly 40 years in these Arctic sites.

Heat flux is the energy transferred per unit of surface area for a given period of time, and it's challenging to collect it during the freeze. Arndt “came up with the idea of measuring it during spring snow melt, building on the need to fill a gap in data on the cold season Arctic heat fluxes,” Zona said.

Arndt also worked with SDSU microbiologist David Lipson who collected soil core samples, which helped him and Zona understand the physical properties of the soil during the spring and fall season.

Arndt ascertained that fresh CO2 production was happening when “we found air pockets in the middle of the soil core that allowed for the melted snow to rush in. The snowmelt is rich in oxygen which helps with the production of carbon dioxide.”

Iron is one of the many minerals soil contains. Their analysis showed the iron was completely oxidized, which can only happen if fresh oxygen in the soil bonds with and oxidizes the iron. The researchers found a steady rise in CO? emissions during this thawing period further suggesting the occurrence of production at this time.

Simpler models of data analysis may miss the rapid warming that happens due to snowmelt, when there's a rapid introduction of oxygen leading to the warming.

“There's a lot more going on in the soil than we previously thought,” Arndt said. “Nature is efficient in that it breaks down lighter compounds preferentially to heavier ones, creating unique isotope signatures, kind of like fingerprints. By looking at isotopes, we can tell how long the compounds have been there and the source of the carbon emitted.”

Arndt and Zona are planning to focus on isotopic analysis next, to reconstruct the age of the compounds in the samples, and the longer scale implications of these results.

“We will look for long-term trends in carbon dioxide release and how the heat fluxes have been changing over the last decade,” Zona said.

This research was funded by grants from the National Science Foundation (NSF), NASA CARVE and ABoVE programs, National Oceanic and Atmospheric Administration CREST, the Horizon 2020 INTAROS, and the NERC UAMS projects.