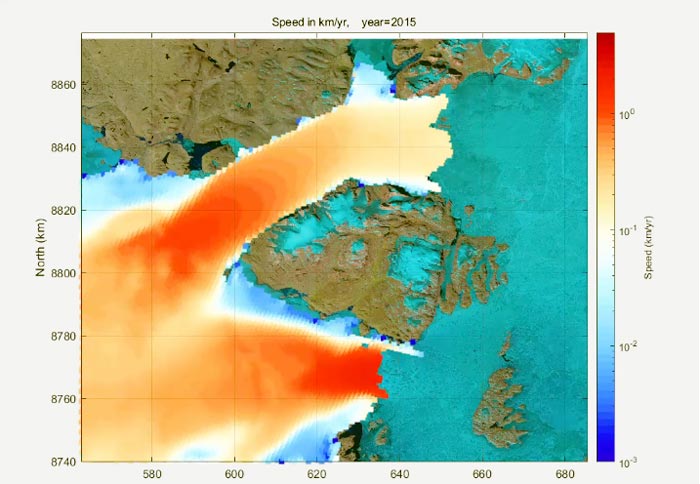 Animation of modelled frontal positions from 2007 to 2100. A Landsat-8 image from 2017 is used as the background. The color denotes the surface speed.
Animation by Shfaqat Abbas Khan, DTU Space, Denmark / https://www.eurekalert.org/multimedia/964131

According to a new study that combined GPS, satellite data, and numerical modelling, ice loss from northeast Greenland could be six times greater by the end of the century than previously thought.

Ice is continuously streaming off Greenland’s melting glaciers at an accelerating rate, dramatically increasing global sea levels. New results published [DATE] in Nature indicate that existing models have underestimated how much ice will be lost during the 21st century. Hence, its contribution to sea-level rise will be significantly higher.

By 2100, the Northeast Greenland Ice Stream will contribute six times as much to the rising sea level as previous models suggested, adding between 13,5 to 15,5 mm, according to the new study. This is equivalent to the entire Greenland ice sheet’s contribution in the past 50 years. The research was carried out by researchers from Denmark, the United States, France, and Germany

“Models are mainly tuned to observations at the front of the ice sheet, which is easily accessible, and where, visibly, a lot is happening.”

The study is partly based on data collected from a network of precise GPS stations reaching as far as 200 km inland on the Northeast Greenland Ice Stream—located behind the Nioghalvfjerdsfjord Gletscher and Zachariae Isstrøm glaciers, one of Earth’s most hostile and remote terrains. The GPS data were combined with surface-elevation data from the CryoSat-2 satellite mission and high-resolution numerical modelling.

“Our data show us that what we see happening at the front reaches far back into the heart of the ice sheet,” said Khan.

“We can see that the entire basin is thinning, and the surface speed is accelerating. Every year the glaciers we’ve studied have retreated further inland, and we predict that this will continue over the coming decades and centuries. Under present day climate forcing, it is difficult to conceive how this retreat could stop.”

In 2012, after decade of melting, the floating extensions of Zachariae Isstrøm collapsed, and the glacier has since retreated inland at an accelerating pace. And though winter 2021 and summer 2022 have been particularly cold, the glaciers keep retreating. Since northeastern Greenland is a so-called Arctic desert – precipitation is as low as 25 mm per year in places – the ice sheet is not regenerating enough to mitigate the melt. However, estimating how much ice is lost and how far into the ice sheet the process occurs is not easy. The ice sheet’s interior, which moves at less than one meter per year, is difficult to monitor, which limits the ability to make accurate projections.

“It is truly amazing that we are able to detect a subtle speed change from high-precision GPS data, which ultimately, when combined with a model of ice flow, inform us on how the glacier slides on its bed,” said coauthor Mathieu Morlighem, a professor of earth sciences at Dartmouth College.

“It is possible that what we find in northeast Greenland may be happening in other sectors of the ice sheet. Many glaciers have been accelerating and thinning near the margin in recent decades. GPS data helps us detect how far this acceleration propagates inland, potentially 200-300 km from the coast. If this is correct, the contribution from ice dynamics to the overall mass loss of Greenland will be larger than what current models suggest.”

The Zachariae Isstrøm was stable until 2004, followed by steadily retreat of the ice front until 2012, when a large portion of the floating sections became disconnected. As more precise observations of change in ice velocity are included in models, it is likely that IPCC’s estimates of 22-98 cm global sea level rise will need to be corrected upwards.

“Data collected in the vast interior of ice sheets, such as those described herein, help us better represent the physical processes included in numerical models and in turn provide more realistic projections of global sea-level rise.”