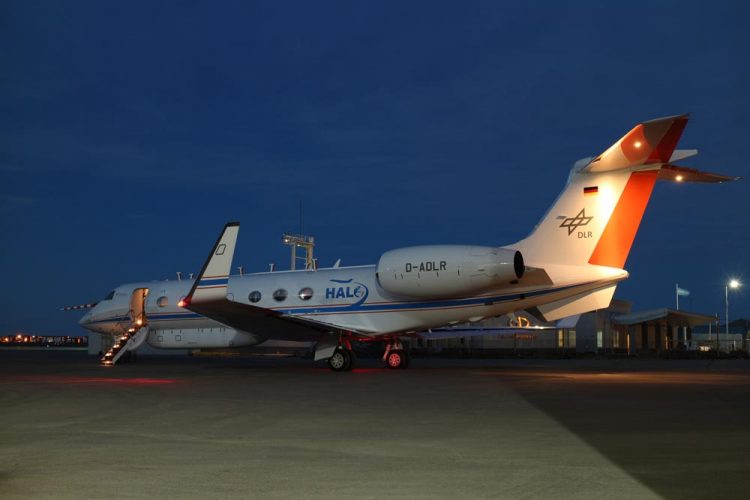 HALO in the twilight: Scientists working on board the HALO research aircraft plan to measure the composition of the atmosphere of the northern and southern hemispheres to learn more about the differences in circulation in the two hemispheres. photo/©: Thorsten Kaluza

The German research aircraft HALO will explore the southern hemisphere as part of the SouthTRAC (Transport and Composition of the Southern Hemisphere UTLS) project in September and November 2019.

The main goals of the first phase of this campaign are to investigate ozone depletion over the Antarctic in springtime, the so-called ozone hole, and to evaluate the importance of gravity waves over the southern tip of the Americas and the Antarctic to the circulation in the stratosphere. The stratosphere contains the ozone layer and is the atmospheric layer at altitudes above 12 kilometers.

In the second phase of the campaign taking place in November, the main scientific focus will be on investigating how air masses are exchanged and mixed between the stratosphere and the troposphere particularly in subtropical regions.

During the transfer flights between Europe and South America, scientists will explore, among other topics, the effect of the current burning of biomass in the Amazon rainforest on atmospheric composition and climate.

Scientists from Johannes Gutenberg University Mainz (JGU) and Goethe University Frankfurt, along with Forschungszentrum Jülich, the German Aerospace Center (DLR), and the Karlsruhe Institute of Technology (KIT), will coordinate the extensive research flights. For this project, the universities of Mainz and Frankfurt are collaborating as part of the Rhine-Main Universities (RMU) alliance.

Focusing on the impact of greenhouse gases on climate change

Trace gases such as carbon dioxide and water vapor are potent greenhouse gases and play an important role in climate change. This also includes stratospheric ozone, which acts as a greenhouse gas. Since the end of the 1980s, the Montreal Protocol has banned the use of chlorofluorocarbons (CFCs), which severely deplete the ozone layer. However, it will take many decades for the ozone layer to recover. At the same time, climate change is affecting the water vapor content of the atmosphere. The SouthTRAC campaign scientists are currently looking in detail at the significance of this for the chemical composition of the air in the southern hemisphere and for global climate change.

The research groups involved are interested in polar ozone depletion itself and in the question of how air masses from the vortex affect the composition of the region at altitudes of 10 to 15 kilometers. This region is also of particular significance to the climate at ground level. Water vapor and ozone play key roles here, as their distribution directly influences the energy balance of the atmosphere. In addition to the effects of polar ozone chemistry, emissions from forest fires in the Amazon and Central Africa interfere with the chemical processes on the ground which determine the production and destruction of ozone and other substances.

The scientists will analyze the chemical as well as the dynamic effects that impact the distribution and mixing of substances affecting atmospheric chemistry and ultimately earth's climate. This research will focus mainly on the influence of tropospheric depressions, stratospheric circulation, and the polar vortex. The relative role of all these phenomena on the region between 10 and 15 kilometers altitude differs significantly between the southern and northern hemisphere.

JGU has leading role in SouthTRAC

Scientists from Professor Peter Hoor's group at the JGU Institute of Atmospheric Physics are part of the project steering group, conducting measurements of carbon monoxide and carbon dioxide, amongst other species. These species potentially indicate the effect of combustion processes at altitudes of up to 15 kilometers, even in the case of fires burning several thousands of kilometers away. In addition, these measurements will be used to investigate the timescales of the dynamic processes that determine the distribution of air masses and affect the climate-relevant species ozone and water vapor. This project will be conducted together with Goethe University Frankfurt, supported by both universities as part of the Initiative Funding for Research of the Rhine-Main Universities (RMU).

One of the lead scientists involved is Dr. Heiko Bozem, who has also made the long transfer flight from Oberpfaffenhofen to Tierra del Fuego. In the second phase, Dr. Daniel Kunkel will prepare flight plans based on current weather forecasts and will also serve aboard HALO as mission scientist.

Meteorological and chemical forecast models will be used to provide information about the local weather as well as the atmospheric conditions and trace gas distribution, which are necessary for precise flight planning. Chemical forecasts will be available on-site, using the Chemical Lagrangian Model of the Stratosphere (CLaMS) developed at Forschungszentrum Jülich. Meteorological forecasts are mainly based on numerical weather predictions from the European Center for Medium-Range Weather Forecasts (ECMWF), but are also provided by the German, British and Argentinian meteorological offices. The HALO long-range atmospheric composition measurements will be complemented by ground-based measuring activities. Measurements will be taken by radiosondes and on board one of the gliders operating out of the town of El Calafate.

The tropopause is the boundary between the weather-active troposphere and the stratosphere above. At mid-latitudes, the tropopause has a long-term average altitude of 8 to 12 kilometers; in the tropics its height can reach up to 18 kilometers altitude. Concentrations of greenhouse gases such as water vapor and ozone strongly change at this altitude. While water vapor strongly decreases with altitude, ozone shows a strong increase forming the ozone layer. The extent of this respective decrease and increase in concentration in the tropopause region ultimately influences the temperature on the ground, due to the absorption of solar and terrestrial radiation. Based on satellite measurements, researchers assume that the distribution of greenhouse gases in the tropopause differs between the northern and southern hemispheres. SouthTRAC is now investigating this disparity properly for the first time.

The polar vortex is formed in winter when no sunlight is available to warm the air masses over the Antarctic. As they cool, these air masses begin to sink, which in turn causes air masses from lower latitudes to flow towards the pole. Under the influence of the earth's rotation, these air masses begin to rotate around the pole at very high wind speeds to form the polar vortex, which spans the entire continent of Antarctica in the stratosphere. It is in the isolated interior of this vortex system that the chemical reactions occur that give rise to the so-called hole in the ozone layer in the southern hemisphere during spring. The position of this vortex can be disturbed by gravity waves.

Gravity waves are manifested as periodic fluctuations in temperature, pressure, and wind that propagate to altitudes up to 90 kilometers into the middle atmosphere, which is made up of the stratosphere and the mesosphere. They are excited when strong wind systems meet high mountain ranges. With vast mountains running north to south and presenting a major obstacle to the very strong winds at these latitudes, the southern tip of South America and the Antarctic peninsula are ideal locations for studying the life cycle of these waves and their influence on climate change in the southern hemisphere.

To analyze the properties of gravity waves, the researchers installed a laser on board the aircraft. To prevent the laser measurements being disturbed, the flights are taking place at night only. “The many night flights present quite a challenge for the scientists,” said Dr. Heiko Bozem. “Our shift in Rio Grande begins at 6 p.m. so that the flights can take place in darkness.” Previously, the HALO aircraft traveled to the project site in three stages, from Oberpfaffenhofen near Munich via the Cape Verde Islands to Buenos Aires and then on to Tierra del Fuego.

The HALO (High Altitude and Long Range) research aircraft is a joint initiative of several German environmental and climate research institutions. HALO is funded by grants from the German Federal Ministry of Education and Research (BMBF), the German Research Foundation (DFG), the Helmholtz Association, the Max Planck Society (MPG), the Leibniz Association, the Free State of Bavaria, Karlsruhe Institute for Technology (KIT), Forschungszentrum Jülich, and the German Aerospace Center (DLR).

Image:
http://www.uni-mainz.de/bilder_presse/08_physik_atmo_halo_southtrac.jpg
HALO in the twilight: Scientists working on board the HALO research aircraft plan to measure the composition of the atmosphere of the northern and southern hemispheres to learn more about the differences in circulation in the two hemispheres.
photo/©: Thorsten Kaluza