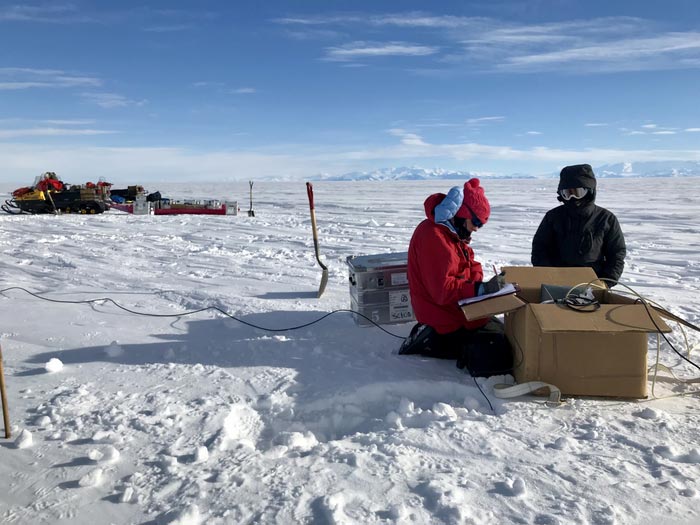 Scientists have made the first detection of groundwater beneath an Antarctic ice stream. The discovery confirms what researchers had already suspected but had been unable to verify until now.

“Ice streams are important because they funnel about 90 percent of Antarctica’s ice from the interior out to the margins,” said Chloe Gustafson, a postdoctoral researcher at UC San Diego’s Scripps Institution of Oceanography. Groundwater at the base of these ice streams can affect how they flow, thus potentially influencing how ice is transported off of the Antarctic continent.

The team imaged only one ice stream, but there are many more in Antarctica. “It suggests that there is probably groundwater beneath more Antarctic ice streams,” Gustafson said.

A team of scientists from Scripps Oceanography and Columbia University’s Lamont-Doherty Earth Observatory led the project. Gustafson and six co-authors present their findings in the May 6 issue of Science.

“It’s been a hypothesis from our understanding of how the planet works that there’s groundwater under Antarctica, but we haven’t been able to measure it before,” said study co-author Helen Amanda Fricker, a Scripps glaciologist and co-director of the Scripps Polar Center.

The researchers measured the groundwater during the 2018-2019 field season by using a ground-based geophysical electromagnetic (EM) method called magnetotellurics. The method uses variations in Earth’s electric and magnetic fields to measure subsurface resistivity. This study was the first time the method had been used to search for groundwater beneath a glacial ice stream.

“This technique typically hasn’t been used in polar environments,” Fricker said. “This is a nice demonstration of the power of the technique and how much it can bring to our knowledge of not just Antarctica, but Greenland and other glacier regions, as well.”

The technique has been used in Antarctica since  the 1990s, but those studies were aimed at imaging deep crustal features at depths well below 10 kilometers (6.2 miles). The studies did have the effect, however, of demonstrating that scientists could use magnetotellurics on ice and snow as well, Gustafson said.

“We took their example and applied it to a shallow question of hydrology, within five kilometers (3.1 miles) of the sub-ice environment.”

In the last decade, airborne electromagnetic techniques have been used to image shallow groundwater in the upper 100 to 200 meters (328 to 656 feet) beneath some thin glaciers and permanently frozen areas of the McMurdo Dry Valleys. But those techniques can only see through about 350 meters (1,148 feet) of ice.

The Whillans Ice Stream, where Gustafson and colleagues collected the data, measures about 800 meters (2,625 feet) thick. Their new data fill in a wide gap between those previous deep and shallow data sets.

“We imaged from the ice bed to about five kilometers and even deeper,” said Kerry Key, an associate professor of earth and environmental sciences at Columbia University and a Scripps Oceanography alumnus.

“My hope is that people will start to view electromagnetics as part of the standard Antarctic geophysical toolkit,” Gustafson said.

The Science study was based on passively collected, naturally generated magnetotellurics signals to measure variations in electrical resistivity.

“This tells us about groundwater characteristics because fresh water is going to show up a lot different in our imaging than salty water,” Gustafson said.

Augmenting the EM measurements was the seismic imaging data provided by co-author Paul Winberry of Central Washington University. That data confirmed the existence of thick sediments buried under ice and snow throughout the 60 miles that separated the field team’s magnetotellurics surveys.

The researchers calculated that if they could squeeze the groundwater from the sediments onto the surface, it would form a lake that ranged from 220 to 820 meters (722 to 2,690 feet) deep.

Groundwater may exist under similar conditions on other planets or moons that are releasing heat from their interiors, Key said.

“You can imagine a frozen lid over a liquid interior, whether it’s completely liquid or liquid-saturated sediments,” he said. “You can think of what we see in Antarctica as potentially analogous to what you might find on Europa or some other ice-covered planets or moons.”

The existence of subglacial groundwater also has implications for the release of significant quantities of carbon that were previously stored by seawater-adapted communities of microbes.

“Groundwater movement means there’s potential for more carbon being transported to the ocean than what we’ve previously considered,” said Gustafson, who completed her PhD under Key’s supervision at Columbia in 2020.