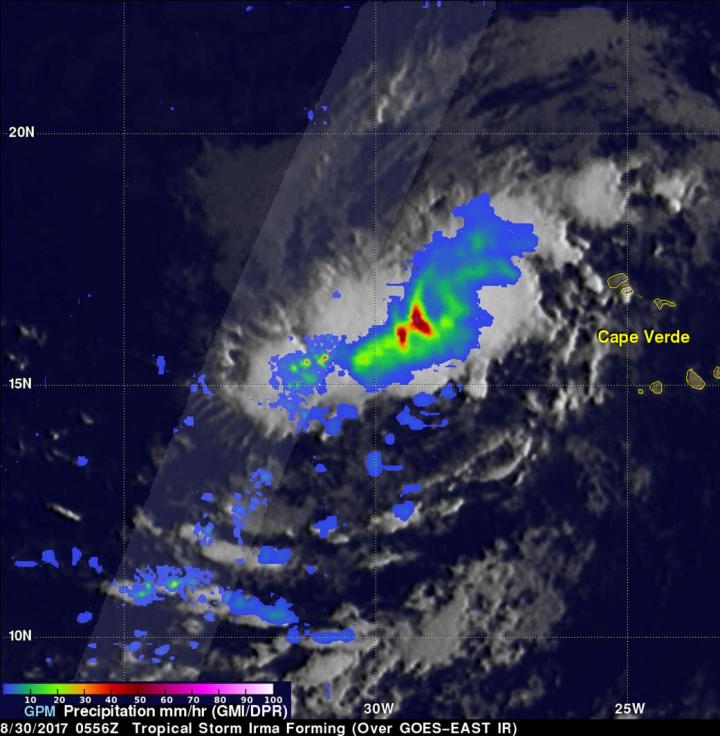 The Global Precipitation Measurement mission or GPM core observatory satellite flew above forming tropical storm Irma on August 30, 2017 at 1:56 a.m. EDT (0556 UTC). This new tropical cyclone was forming from a tropical wave that was passing to the east of the Cape Verde islands.

Radar (DPR) instruments (shown in lighter shades) revealed that heavy rain was falling in this area of strong convective storms. Rain falling at a rate of over 2.6 inches (66 mm) per hour was indicated by GPM's GMI.

DPR scanned storms to the west of the center of circulation and found rain dropping at rate of over 4.96 inches (126 mm) per hour. GPM's radar (DPR Ku band) showed that heights of convective storm tops located to the west of the forming tropical storm were reaching altitudes above 8.2 miles (13.2 km). GPM is a joint mission between NASA and the Japan Aerospace Exploration Agency, JAXA.

At 11 a.m. EDT (1500 UTC), the center of Tropical Storm Irma was located near 16.4 degrees north latitude and 30.3 degrees west longitude. That's about 420 miles (675 km) west of the Cabo Verde Islands. Irma was moving toward the west near 13 mph (20 kph) and this general motion is expected to continue for the next couple of days.

Satellite wind data indicate that the maximum sustained winds are near 50 mph (85 kph) with higher gusts. Some strengthening is forecast during the next 48 hours and Irma could become a hurricane on Friday, Sept.1.

Infrared image of Irma's western side confirmed the data from GPM. An infrared image was taken from the AIRS instrument aboard NASA's Aqua satellite on Aug. 30 at 11:53 a.m. EDT (1553 UTC). AIRS found powerful storms with very cold cloud top temperatures as cold as minus 63 degrees Fahrenheit (minus 53 degrees Celsius). Storms with cloud tops that cold extend high into the troposphere and have the ability to generate heavy rainfall.

The National Hurricane Center (NHC) indicates that Irma is moving toward the west-northwest. Irma is then expected to stay at low latitudes next week while approaching the Lesser Antilles.