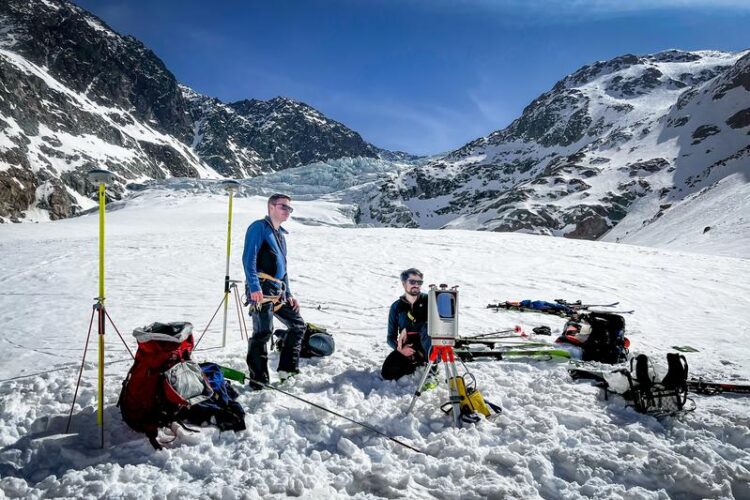 Eichstätt geographers survey mountainscape to come to light as glaciers melt away.

How thick is the remaining layer of glacial ice in the Alps? And what is going on underneath that cover of ice? A research team of the Geography Department at the Catholic University of Eichstätt-Inolstadt (KU) is taking a look at what happens when glaciers melt – and thereby identifies potential danger zones.

Climate change has caused glacier ice worldwide to melt at an ever faster pace. The Gepatschferner Glacier in the Austrian Kaunertal, for instance, has been losing 50 meters in length every year. The thickness of the ice layer is likewise shrinking rapidly. But what will come to light when glaciers melt? It is this question that has kept scientists of the Chair of Physical Geography of the KU busy. In this research project, they have cooperated with colleagues of the Institute for Interdisciplinary Mountain Research (IGF) of the Austrian Academy of Sciences in Innsbruck and the Institute for Alpine Environment at Eurac research in Bolzano. This winter, the research team set out to the Central Alps, on a quest to find out more about the elevation of the glacial ice layer and the topography beneath.

The destinations of their fieldwork were Gepatschferner in Tyrol’s Kaunertal and Fürkeleferner and Zufallferner below Monte Cevedale peak in the Ortler Alps massif in South Tyrol. These glaciers are located in areas where the DFG research project SEHAG („SEnsitivität Hoch Alpiner Geosysteme gegenüber dem Klimawandel ab 1850“), led by the Chair of Physical Geography at the KU, studies the changes in the high mountain regions since the end of the so-called Little Ice Age of around 1850 to today. The aim of this research is to come to a prognosis as to how glaciers and the surrounding mountainscape will develop up to the year 2050. “Since glaciers are currently severely out of balance and glacier melting will continue to increase rapidly over the next years, it is of great importance for our international and interdisciplinary research project to know what kind of topography can be expected to surface from the areas that are still glaciated today,” says Florian Haas from the Eichstätt Chair of Physical Geography.

When glacial ice disappears, new landscapes emerge. The former glacial areas become new habitats for a wide variety of animal and plant species. Mosses, lichens and some species of flowering plants are among the first new settlers. Shrubs and trees gradually follow. However, the newly emerged mountainscapes can also harbor potential hazards. New lakes might form in depressions created by the glacier. If they are surrounded by steep cliffs, thawing permafrost can cause rockfalls and the subsequent floodwaves in mountain streams can endanger man-made infrastructure downstream.

Whether depressions are hidden beneath a glacier can be indirectly determined by measuring the elevation of glacial ice. This is done using radar waves. The waves meet no resistance as they penetrate the ice, but are reflected by the bedrock beneath. In this way, the thickness of the ice cover can be calculated using the transit-time of the radar signal. To obtain the most comprehensive resolution possible of the landscape beneath the glacier, the radar is mounted on a sled equipped with a high-precision GPS device, which makes it possible to exactly locate the measured points.

“Such measurements are very complex and can be quite dangerous, because you have to try to move the sled over the entire glacier,” says Florian Haas. “The sled has to be steered by two skiers. They have to be very cautious because glacier crevasses, some of them very wide, are usually covered by snow in winter. This means, the researchers had to repeatedly ski downhill while secured by a belay rope and taking great care and then climb up the slope again on skis. Unfortunately, a single descent would not do the trick”. According to Haas, additional team members are needed to generate correction signals for the GPS and to scan the glacier surface with a 3D scanner. “Only with a combination of all these data is it possible to record the thickness of the ice layer and thus the topography under the glacier over a wide area and as precisely as possible,” says the geographer.

Not only data acquisition itself is complex. Just transporting the heavy measuring equipment and backup material to the high-altitude mountain regions requires good organization. “Those parts of the glacier that we surveyed during our campaign, are at more than 3000 meters above sealevel and are quite hard to reach. Without a helicopter to transport us, this would not have been possible”, says Florian Haas.

But all the trouble seems to have paid off: The terrain survey has now been completed successfully and without any incidents, and the data is currently being processed. Computing power is now brought to bear on the combination and interpretation of radar data, GPS measurements and 3D imaging of the topography, says Florian Haas: “In a few weeks we will know exactly how thick the remaining layer of ice in the three surveyed glaciers is and what’s going on underneath that ice.”