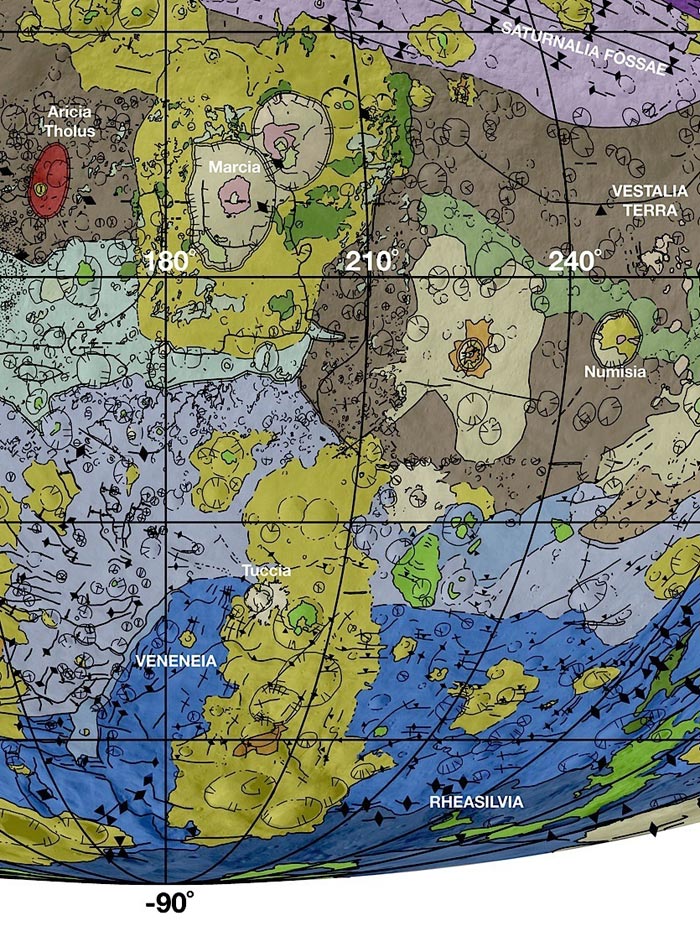 In this detail from the new geological map of Vesta, brown colors represent the oldest, most heavily cratered surface. Purple colors and light blue represent terrains modified by the Veneneia and Rheasilvia impacts, respectively. Light purples and dark blue colors below the equator represent the interior of the Rheasilvia and Veneneia basins. Greens and yellows represent relatively young landslides or other downhill movement and crater impact materials, respectively. Tectonic features such as faults are shown by black lines. Photo by: NASA/JPL-Caltech/Arizona State University

The mapping was carried out using images from NASA's Dawn spacecraft, which orbited Vesta between June 2011 and September 2012. The images let scientists create high-resolution geological maps, revealing the variety of Vesta’s surface features in unprecedented detail.

“The geologic mapping campaign at Vesta took about two and a half years to complete,” says Williams. “The resulting maps enabled us to construct a geologic time scale of Vesta for comparison to other planets and moons.”

The geologic map and timescale appear in a paper by Williams and others in the December 2014 issue of the journal Icarus. The issue also has 10 other papers reporting on Dawn's investigation of Vesta. In addition to Williams, the mapping effort was also led by R. Aileen Yingst of the Planetary Science Institute, Tucson, Arizona, and W. Brent Garry of NASA's Goddard Spaceflight Center, Greenbelt, Maryland.

The mappers found that Vesta’s geologic time scale has been shaped by a sequence of large impact events. The biggest of these were the impacts that blasted the large Veneneia and Rheasilvia craters early in Vesta's history, and the Marcia crater late in its history.

But how long ago did specific events happen? An age in years is quite difficult to determine because the samples scientists have from Vesta – a family of basaltic meteorites called HEDs, for howardite-eucrite-diogenite – do not show a clear formation age (as dated by laboratory methods) that can be linked to specific features on the asteroid.

“So figuring out an actual date in years is a step-by-step-by-step process,” explains Williams. “We work with rock samples from the moon, mostly from Apollo missions decades ago. These give actual dates for large lunar impacts.” The tricky part, he says, lies in creating a model that links the lunar impact time scale to the rest of the solar system.

In the case of Vesta, scientists have developed two different models to estimate surface ages. One is based on the lunar impact rate, the other on the frequency of asteroid impacts. Thus scientists can use two approaches with crater statistics to date Vesta's surface, but these yield two different age ranges.

“Vesta's last big event, the Marcia impact, has an age that's still uncertain,” says Williams. “But our current best estimates suggest an age between roughly 120 and 390 million years.” The difference, he explains, comes from which cratering model is used.

The geologic mapping relied on images taken by the framing camera provided by the Max Planck Institute for Solar System Research of the German Max Planck Society and the German Aerospace Center (DLR). This camera takes panchromatic images and seven bands of color filtered images. Overlapping images provide stereoscopic views that create topographic models of the surface to help the geologic interpretation.

The objective of NASA's Dawn mission, launched in 2007, is to characterize the two most massive objects in the main asteroid belt between Mars and Jupiter. Vesta was thought to be the source of a unique set of basaltic meteorites (the HEDs), and Dawn confirmed the Vesta-HED connection. The Dawn spacecraft is currently on its way to the dwarf planet Ceres, the largest object in the asteroid belt. The spacecraft will arrive at Ceres in March 2015. The Dawn mission is managed by the NASA Jet Propulsion Laboratory in Pasadena, California.

The School of Earth and Space Exploration is an academic unit of ASU's College of Liberal Arts and Sciences.