"Flight recorder" of rocks within the Earth’s crust 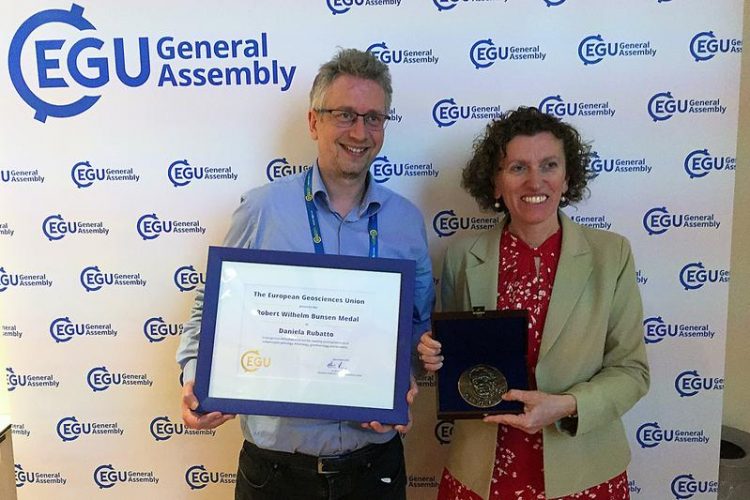 Daniela Rubatto received the prestigious Robert Wilhelm Bunsen Medal of the European Geosciences Union (EGU) on April 9, 2019. The award singles out Daniela Rubatto’s innovative research on the trace element contents of the mineral zircon and associated rock-forming minerals. This research has provided a new way to connect ages of minerals to the conditions at which the minerals formed.

A “flight recorder” of geological processes

Daniela Rubatto's innovative method makes it possible to extract valuable information from minerals. This data allows reconstructing the speed and duration of travel of rock masses within the Earth, similarly to a flight recorder that documents the time and place of a moving airplane.

Rubatto obtained these results by careful analysis of individual mineral zones with an ion microprobe, an advanced instrumentation that allows obtaining the isotopic composition of minerals from a very small volume.

This approach provides a new and rigorous way to constrain the duration and rate of metamorphic processes in rocks and represents a significant advance in metamorphic petrology; it contributes to the better understanding and quantification of the dynamics of geological processes over wide temporal and spatial scales.

The Bunsen Medal was awarded during the EGU General Assembly from April 7-12, 2019 in Vienna. It is only the second time that the Robert Wilhelm Bunsen Medal is awarded to a female researcher. “It is a great honour for me to receive the Robert Wilhelm Bunsen Medal. Moreover, it is a confirmation that all the efforts the students, collaborators and I invested, helped to advance the field of geology – for the benefit of science and society,” says Rubatto.

“The University of Bern has an excellent combination of expertise in solid earth geochemistry, ranging from field-work to modelling, together with advanced instruments necessary for my research,” says Rubatto.

The Robert Wilhelm Bunsen Medal represents an additional award in Daniela Rubatto's career: She has already received several prizes and honors, including the ETH Medal for an outstanding PhD thesis, the J G Russel Award and the Dorothy Hill Medal of the Australian Academy of Sciences.

Catching traces of fluids in minerals

Daniela Rubatto is currently investigating the interaction between fluids, mainly water, and minerals in the deepest part of the Earth's crust. These fluids facilitate some of the most important geological processes, from plate tectonic to volcanism, and are responsible for significant mass and heat transfer in our planet. These fluids are difficult to catch because they move rapidly and are not commonly retained in rocks. “I am currently developing analytical methods to reveal the geochemical traces of these fluids in minerals,” says Rubatto. “The Bunsen Medal is a motivation for me and my team to continue to do our best, even when we are facing obstacles or setbacks.

Daniela Rubatto is committed to promoting young researchers. At the Australian National University, for example, she co-founded the Network for Early Career Academics (NECTAR). Since then, this network has grown significantly and is now an established voice of young researchers at ANU. Over the career Daniela Rubatto has supervised eight PhD students and worked with more than 25 others from all over the world. Some current and former PhD students joined Daniela Rubatto at the EGU award ceremony in Vienna.