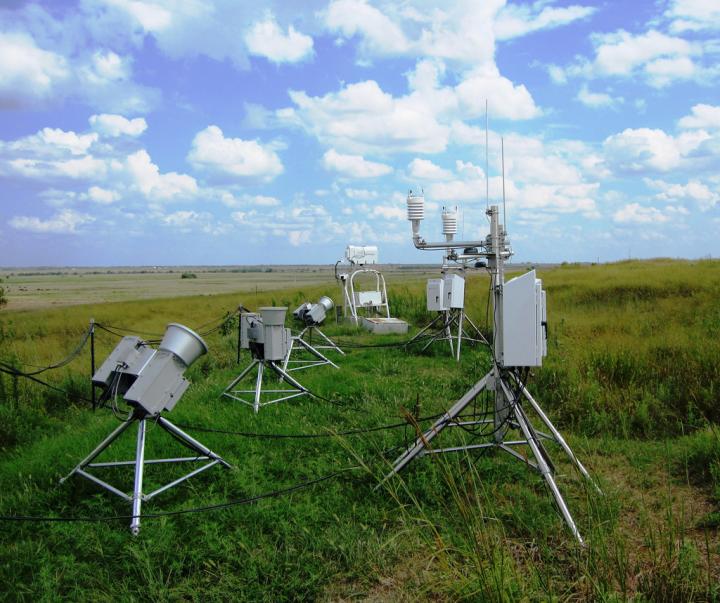 The scientists used radiometers, shown here, to isolate the signal of methane's greenhouse effect. Radiometers are among the many instruments at ARM's Southern Great Plains observatory that the team utilized as part of this study. Credit: ARM Climate Research Facility

These findings were published online April 2 in the journal Nature Geoscience in an article entitled “Observationally derived rise in methane surface forcing mediated by water vapour trends.” The paper indicates that the greenhouse effect from methane tracked the global pause in methane concentrations in the early 2000s and began to rise at the same time that the concentrations began to rise in 2007.

“We have long suspected from laboratory measurements, theory, and models that methane is an important greenhouse gas,” said Berkeley Lab Research Scientist Dan Feldman, the study's lead author. “Our work directly measures how increasing concentrations of methane are leading to an increasing greenhouse effect in the Earth's atmosphere.”

Gases that trap heat in the atmosphere are called greenhouse gases, in large part because they absorb certain wavelengths of energy emitted by the Earth. As their atmospheric concentrations change, the scientific community expects the amount of energy absorbed by these gases to change accordingly, but prior to this study, that expectation for methane had not been confirmed outside of the laboratory.

This study was enabled by the comprehensive measurements of the Earth's atmosphere that the DOE has routinely collected for decades at its Atmospheric Radiation Measurement (ARM) facilities, and conversely, would not be possible without such detailed observations.

The researchers believe this type of direct field observation can provide a more accurate and complete picture of the relationship between atmospheric greenhouse gas concentrations and their warming effect on Earth's surface.

The research was funded by the Department of Energy's Office of Science.

Lawrence Berkeley National Laboratory addresses the world's most urgent scientific challenges by advancing sustainable energy, protecting human health, creating new materials, and revealing the origin and fate of the universe. Founded in 1931, Berkeley Lab's scientific expertise has been recognized with 13 Nobel Prizes. The University of California manages Berkeley Lab for the U.S. Department of Energy's Office of Science. For more, visit http://www.lbl.gov.