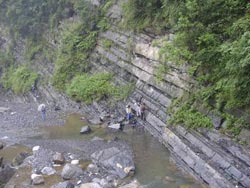 This photo shows researchers studying exposures of the Doushanto Formation. Located in China, the formation is most notable for its scientific contributions in the hunt for Precambrian life.<br><br>Credit: M. Kennedy<br>

A dramatic rise in atmospheric oxygen levels has long been speculated as the trigger for early animal evolution. While the direct cause-and-effect relationships between animal and environmental evolution remain topics of intense debate, all this research has been hampered by the lack of direct evidence for an oxygen increase coincident with the appearance of the earliest animals — until now.

In the Sept. 27 issue of the journal Nature, the research team, led by scientists at the University of Nevada, Las Vegas, offers the first evidence of a direct link between trends in early animal diversity and shifts in Earth system processes.

The fossil record shows a marked increase in animal and algae fossils roughly 635 million years ago. An analysis of organic-rich rocks from South China points to a sudden spike in oceanic oxygen levels at this time — in the wake of severe glaciation. The new evidence pre-dates previous estimates of a life-sustaining oxygenation event by more than 50 million years.

“This work provides the first real evidence for a long speculated change in oxygen levels in the aftermath of the most severe climatic event in Earth's history — one of the so-called 'Snowball Earth' glaciations,” said Timothy Lyons, a professor of biogeochemistry at UC Riverside.

“We found levels of molybdenum and vanadium in the Doushantuo Formation mudstones that necessitate that the global ocean was well ventilated. This well-oxygenated ocean was the environmental backdrop for early animal diversification,” said Noah Planavsky, a former UCR graduate student in Lyons's lab now at CalTech.

The high element concentrations found in the South China rocks are comparable to modern ocean sediments and point to a substantial oxygen increase in the ocean-atmosphere system around 635 million years ago. According to the researchers, the oxygen rise is likely due to increased organic carbon burial, a result of more nutrient availability following the extreme cold climate of the 'Snowball Earth' glaciation when ice shrouded much of Earth's surface.

Lyons and Planavsky argued in research published earlier in the journal Nature that a nutrient surplus associated with the extensive glaciations may have initiated intense carbon burial and oxygenation. Burial of organic carbon — from photosynthetic organisms — in ocean sediments would result in the release of vast amounts of oxygen into the ocean-atmosphere system.

“We are delighted that the new metal data from the South China shale seem to be confirming these hypothesized events,” Lyons said.

The joint research was supported by grants from the National Science Foundation, the NASA Exobiology Program, and the National Natural Science Foundation of China. Besides Lyons and Planavsky, the research team includes Swapan K. Sahoo (first author of the research paper) and Ganqing Jiang (principal investigator of the study) of the University of Nevada, Las Vegas; Brian Kendall and Ariel D. Anbar of Arizona State University; Xinqiang Wang and Xiaoying Shi of the China University of Geosciences (Beijing); and UCR alumnus Clint Scott of United States Geological Survey.

The University of California, Riverside is a doctoral research university, a living laboratory for groundbreaking exploration of issues critical to Inland Southern California, the state and communities around the world. Reflecting California's diverse culture, UCR's enrollment has exceeded 20,500 students. The campus will open a medical school in 2013 and has reached the heart of the Coachella Valley by way of the UCR Palm Desert Center. The campus has an annual statewide economic impact of more than $1 billion. A broadcast studio with fiber cable to the AT&T Hollywood hub is available for live or taped interviews. UCR also has ISDN for radio interviews. To learn more, call (951) UCR-NEWS.