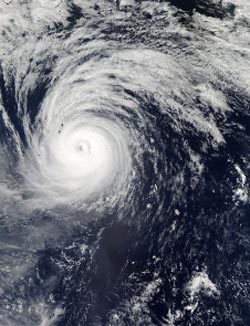 On Oct. 25 at 03:20 UTC, the MODIS instrument aboard NASA's Aqua satellite captured this visible image of Typhoon Lekima in the northwestern Pacific Ocean, the second to last day that it was at typhoon status before weakening. <br>Image Credit: NASA Goddard MODIS Rapid Response Team <br>

On Oct. 25 at 03:20 UTC, the Moderate Resolution Imaging Spectroradiometer or MODIS instrument aboard NASA's Aqua satellite captured a visible image of Typhoon Lekima in the northwestern Pacific Ocean.

It was the second to last day that Lekima held onto typhoon status before weakening to an extra-tropical storm. The image showed that Lekima still maintained an eye, although it was filling in with clouds. At the time of the MODIS image, bands of thunderstorms still wrapped tightly around the center of circulation.

On Saturday, Oct. 26 the Joint Typhoon Warning Center issued its final warning on Typhoon Lekima as it headed northeast into the cooler waters of the northern Pacific Ocean.