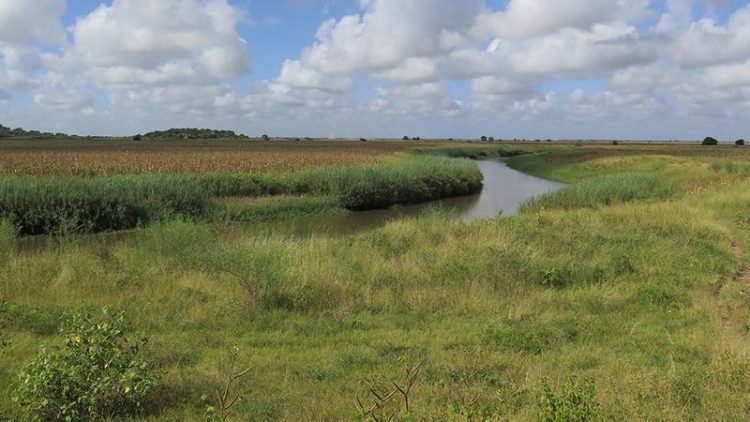 The catchment area of the Limpopo River. Here lived an ancestor of man, Paranthropus robustus about two million years ago. MARUM – Center for Marine Environmental Sciences, University of Bremen

Africa plays a prominent role in human evolution, and is considered by researchers to be the cradle of humanity. In the mid-20th century anthropologists found fossils of Paranthropus robustus in South Africa, which belongs to an evolutionary side branch of Homo sapiens. Paranthropus robustus lived around two million years ago but eventually died out.

Possible reasons for the extinction have now been brought to light by an international team of anthropologists and geoscientists led by Dr. Thibaut Caley of the University of Bordeaux. In this effort, the researchers, who include Dr. Lydie Dupont and Dr. Enno Schefuß of MARUM – Center for Marine Environmental Sciences at the University of Bremen combined various indicators to reconstruct the climatic conditions in southeast Africa at this time. The results were published in the professional journal Nature on July 9th.

The idea of combining different methods arose from a seeming contradiction: While climate records from northern Africa indicate that conditions were becoming more arid, data from Lake Malawi suggest exactly the opposite. Was it really true that southeast Africa became more humid as northern Africa became drier? What, then, could have led to the extinction of Paranthropus robustus?

Lake Malawi lies to the northeast of the catchment basin of the Limpopo, one of Africa’s largest rivers. In Maputo Bay (Mozambique) the Limpopo flows into the Indian Ocean. The sediment core – the archive investigated by the researchers for this study – was taken from here.

Due to the continuous deposition, marine sediment cores allow the researchers to observe a sequence of climate changes over long periods of time. Microfossils and pollen from the land are also washed into the ocean by the Limpopo and deposited on the ocean floor.

This allows the findings from sites on land to be compared to their temporal development. As Dr. Lydie Dupont from MARUM notes, data from the land often only encompass short time periods, but they can provide important clues about the occurrences of species and their food sources. With the help of the sediment cores, the scientists had access to a climate record spanning about 2.14 million years.

The team combined very different kinds of analyses. Hydrogen as well as carbon isotopes of molecular plant fossils were investigated, and these were compared with the results of pollen analyses and element compositions. Each analysis alone can be interpreted in different ways. “Only through the comprehensive consideration could a coherent picture of the climate in the Limpopo region be reconstructed,” says Lydie Dupont.

Furthermore, the team determined the changes in sea-surface temperatures for this time period, allowing them to assess the influence of the ocean on the climate on land. Combining their results with data from the literature, the researchers were able to draw conclusions about the causes of climate changes that occurred during the time when Paranthropus robustus lived and ultimately died out.

The combined results from Limpopo portray a different picture than the study from Lake Malawi. From about 1 million years ago to 600,000 years ago climate became substantially more arid. At the same time, climate variability increased noticeably.

“What eventually led to the extinction is difficult to say,” says Dr. Enno Schefuß. Climatic changes always lead to adaptations by organisms – including adaptation of their feeding habits. If the conditions change extremely rapidly over a short period of time, organisms are less apt to adjust evolutionarily to the altered circumstances. According to the findings in the Limpopo region, Paranthropus robustus died out 600,000 years ago.

Using state-of-the-art methods and through participation in international projects, MARUM investigates the role of the ocean in the Earth’s system, particularly with respect to global change. It quantifies the interactions between geological and biological processes in the ocean and contributes to the sustainable use of the oceans. MARUM comprises the DFG Research Centre and the Excellence Cluster “The Oceans in the Earth System”.