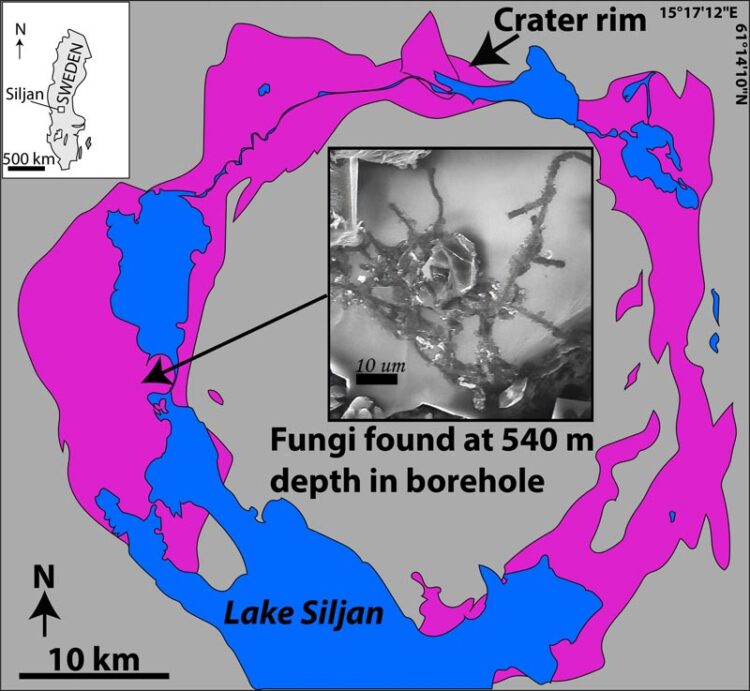 Fractured rocks of impact craters have been suggested to be suitable environments for deep colonization of microbial communities. In a new study published in Communications Earth & Environment, a team of researchers shows that fungi has colonized deep parts of the largest impact crater in Europe, the Siljan impact structure, Sweden. Intriguingly, the fungi seem to have been fueling methane production in the crater.

At the scenic Swedish lake of Siljan, an impressive impact structure of more than 50 km in diameter formed almost 400 million years ago. In newly retrieved bore cores from drillings deep into the crater, a team of researchers have found fossil evidence of fungi.

The researchers examined an intensively fractured rock section at 540 depth level in the crater and noted fine filamentous structures in the vuggy rock. After closer examination in the laboratory, it became clear to them that the filaments were fossilized remains of fungi. Fungi that withstand the oxygen free environment at these depths.

The relative abundance of different isotopes of carbon and sulfur within minerals found in relation to fungi suggested to the researchers that the fungi were involved in methane- and sulfide-forming processes in relationships with other inhabitants of the deep biosphere – bacteria and archaea.

Henrik Drake, of the Linnaeus University, Sweden, and lead author of the study, explains the discovery: – The findings suggest that fungi may be widespread decomposers of organic matter and overlooked symbiotic partners to other, more primitive, microorganisms, thereby capable of enhancing the production of greenhouse gases in the vast rock-hosted deep biosphere.

Radioisotopic dating of tiny calcite crystals formed following microbial methane formation revealed an age of the fungi fossils to around 39 million years ago, more than 300 million years after the meteorite impact.

– We propose that the anaerobic fungi decomposed organic bituminous material in the fractures and produced hydrogen gas that fueled methanogens. This would be the first in situ finding of ancient anaerobic fungi linked to methanogenesis at great depth in the continental crust, says Magnus Ivarsson, at the Swedish Museum of Natural History and co-author of the study.

The impact structure, with a ring zone of down-faulted Paleozoic sediments, has been optimal for deep colonization of fungi, because energy sources in the form of organics and hydrocarbons from overlying shales have migrated throughout the fractured crater.

-The preserved organic molecules that we could detect in the fungal remains give us additional evidence for a fungal origin and also for the proposed biodegradation pathway of shale-derived hydrocarbons, ultimately leading to production of methane at depth, adds co-author Christine Heim, of University of Cologne, Germany.

Henrik Drake summarizes:
-Microorganisms and their strategies for survival and colonization of Earth’s most hostile environments continue to amaze and surprise us, and here we add another fungal piece to the deep biosphere jigsaw puzzle.

More information
The results are presented in the article”Fossilized anaerobic and possibly methanogenesis-fueling fungi identified deep within the Siljan impact structure, Sweden” in the Nature journal Communications Earth & Environment (published 18th of February 2021). DOI:10.1038/s43247-021-00107-9. The article is available in full-length here: https://www.nature.com/articles/s43247-021-00107-9