Home / Earth Sciences / Erosion, landslides and monsoon across the Himalaya
29.04.2015

Erosion, landslides and monsoon across the Himalaya 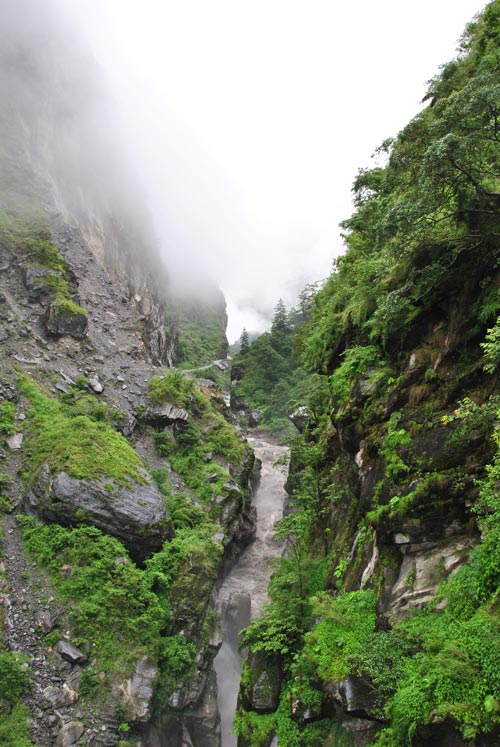 Deepest gorge in the world during monsoon, the Kali Gandaki River in Nepal squeezes his way through a a vary narrow bedrock canyon on its way from the Tibetean Plateau (~5000 m asl.) down, through the High Himalayan mountain chain, to the Indian Lowlands (~100 m asl.). Photo: Christoff Andermann, GFZ

In these days, it was again tragically demonstrated that the Himalayas are one of the most active geodynamic regions of the world. Landslides belong to the most important geohazards. Besides earthquakes they are triggered mainly by strong rainfall events. A team of scientists from Nepal, Switzerland and Germany was now able to show how erosion processes caused by the monsoon are mirrored in the sediment load of a river crossing the Himalaya.

The geoscientists used data from two stations along the Kali Gandaki, a river that traverses the Himalaya from North to South through the deepest valley on Earth. The Kali Gandaki flows between the peaks of the Annapurna and Dhaulagiri, both reaching above 8000 m in height, and joins the Ganges in India. One of the stations is located at the transition from the Tibetan plateau and the high Himalayas, the other one lies in the middle Himalaya, south of the high peaks.

The size of particles transported transported by the river ranges from fine dust to boulders. Important information about erosion mechanisms in the river catchment can be obtained from these sizes, since they are determined by the rocks that are supplied from hillslopes and moved into the river by landsliding.

“For the first time we were able to obtain a time series of measurements from two different locations along a single river”, says Christoff Andermann from the GFZ German Research Centre for Geosciences. “In this way we can differentiate between sediments: which material came from Tibet and were transported through the Himalaya, and which were produced in the Himalayas themselves?” The key to the answer for these questions lies in the size of the transported particles, the grain size.

Although the Tibetan material always shows the same size, the Himalayan sediment is bigger during the summer monsoon. GFZ scientist Andermann: “The comparison with the timing of landslides shows the relationship between the erosion of the mountains and the monsoon, since most landslides are caused by heavy rain.”

The study raises interesting questions about geo-archives: the erosional history of mountains can be reconstructed from their deposits. However, sediments in the Gulf of Bengal, commonly associated with the Himalaya, contain mainly fine material. The coarse material of the Himalaya seem to have been lost somewhere on the way to the ocean. Thus, the question arises where the sediments in the Gulf of Bengal originated from and what stories they can tell.

The cover photo of this GRL issue is a contribution tomthos article and was provided by Niels Hovius, GFZ German Research Centre for Geosciences

Fig. 2: Deepest gorge in the world during monsoon, the Kali Gandaki River in Nepal squeezes his way through a a vary narrow bedrock canyon on its way from the Tibetean Plateau (~5000 m asl.) down, through the High Himalayan mountain chain, to the Indian Lowlands (~100 m asl.). Photo: Christoff Andermann, GFZ
https://media.gfz-potsdam.de/gfz/wv/05_Medien_Kommunikation/Bildarchiv/_Einzelbi…