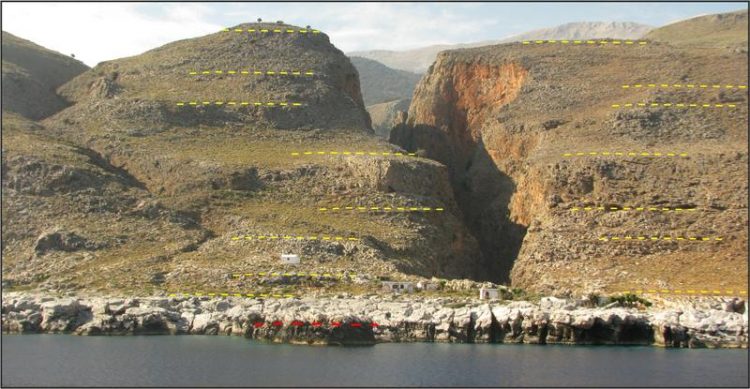 Flight of marine terraces on the south coastline of Crete, Greece, eastern Mediterranean. The lower prominent paleoshoreline (indicated by the red-line) records tectonic rock uplift during the 365 AD M>8 earthquake. The higher marine terraces (indicated by the yellow-lines) record cumulative uplift over many earthquake-cycles that occurred during the last 125,000 years. Credit: Vasiliki Mouslopoulou, GFZ

To test their hypothesis, the scientists investigated ancient coastlines that were preserved over time, so-called paleoshorelines, to determine the rate of uplift over past millennia. Vasiliki Mouslopoulou says: “It is not unlikely that coastlines along active subduction margins with no detectable tectonic uplift over the last 10,000 years will accommodate bigger than M7 earthquakes in the near future.”

Uplift is common along the coastlines of continents at subduction systems worldwide (e.g., Kamchatka, Japan, New Zealand and Papua New Guinea) with rates of vertical uplift accrued over the last 10,000 years being generally higher – up to ten times more than for time intervals larger than 125,000 years.

Paleoshorelines are a useful tool to constrain the magnitude and mechanisms of this uplift, as they are often spectacularly preserved as wave-cut platforms, benches and sea-notches, providing a geological record of the interplay between sea-level changes and rock uplift.

Data analysis and modelling suggest that varying uplift rates along subduction margins are mainly a short-term phenomenon. For geologists, short term means shorter than 20,000 years. These uplift rates cannot be accounted for by plate-boundary processes, as previously thought. Instead, they reflect a propensity for natural temporal variations in uplift rates where recent (not more than 10,000 years ago) uplift has been greatest due to temporal clustering of large-magnitude (bigger than M7) earthquakes on upper-plate faults.

Given the size and geographical extent of the analyzed dataset the conclusions of this work are likely to have wide applications.

Asked what's new with these findings Vasiliki Mouslopoulou explains: “For the first time temporal clustering of great-earthquakes is shown on active subduction margins, indicating an intense period of strain release due to successive earthquakes, followed by long periods of seismic quiescence.” This finding has applications to the seismic hazard of these regions, as it highlights the potential for future damaging earthquakes and tsunamis at active subduction margins with no measurable recent uplift. In such cases, paleoshorelines older than 10,000 years could provide an important constraint for hazard analysis. In other words: To assess the likelihood of future great quakes it will help to look at paleoshorelines.

Further, it alerts scientists that earthquake clustering may not only characterise shallow faulting and smaller-sized earthquakes with magnitudes lower than M7 but it is a property of large subduction earthquakes.

This work presents a conceptual model in which strain is released by temporally clustered great-earthquakes that rupture faults within the upper-plate as opposed to the zone where the tectonic plates meet (plate-interface). Onno Oncken of GFZ comments: “This is an intriguing finding that changes the stereotype view that all or most great subduction earthquakes occur along the active contact, i.e. plate-interface, of the two converging plates. We hope that this new finding will promote the mapping and discovery of such faults along active subduction margins and will also help explain the variability in the recurrence of great-earthquakes encountered on many subductions globally.”