Does the ice sheet in East Antarctica shrink or grow under warming climate? 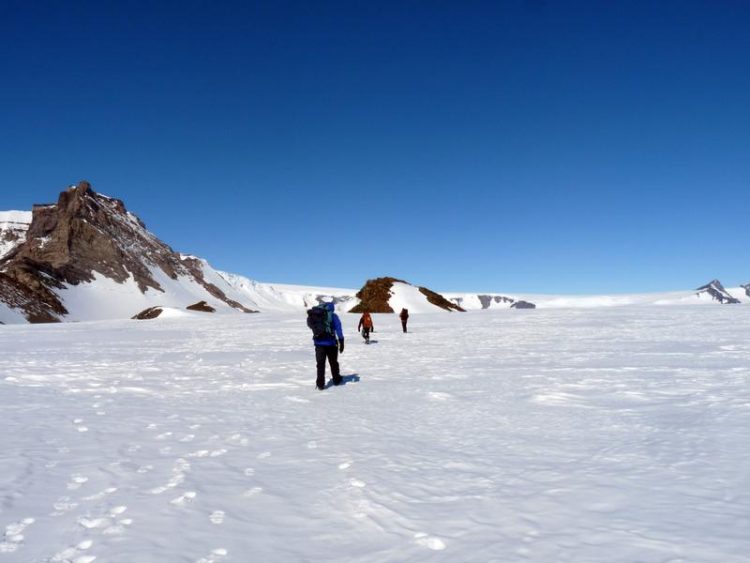 In the Eastern Antarctic, scientists are taking samples from the so-called nunataks. The team is now in Dronning Maud Land for the second time after an expedition in February 2017. Jennifer Newall

The Antarctic research season has begun 15 December, when researchers in the international research project MAGIC-DML returned to Dronning Maud Land in Antarctica to investigate how ice sheet volume has changed.

Dronning Maud Land in Antarctica is almost entirely covered by the East Antarctic Ice Sheet. Even though a reduction in ice sheet volume since the last ice age has been confirmed here, it is one of the least studied areas in Antarctica.

Underneath the ice sheet is a landscape composed of hills, valleys, mountains, and planes, similar to landscapes on other continents. When the ice sheet shrinks, this landscape becomes gradually exposed and the first parts of the landscape to emerge from the ice are the summits of the highest mountains, known as nunataks.

Nunataks contain a wealth of information that can show how thick the ice sheet was during various periods of the past when global climate was colder than present and how much it has thinned until today. Nunataks also reveal unique information on the fluctuations of the ice surface during past warm periods, such as the mid-Pliocene warm interval dated back to about 3 million years ago.

“Understanding how the ice has thinned is very important in order to understand how the entire ice sheet might change in the long run. We know very little about this when it comes to Dronning Maud Land,” says Arjen Stroeven, Professor in Physical Geography at Stockholm University, and Principal Investigator of the project.

Earth is constantly bombarded by cosmic radiation which consists of extremely energetic particles from space. The ice sheet acts as a shield, but when the ice sheet shrinks and nunataks are exposed, minerals in exposed rock, such as quartz, become enriched in cosmogenic nuclides. By measuring the concentration of such cosmogenic nuclides in erratic rocks on the slopes of nunataks, we can calculate how long these rocks have been exposed to cosmic radiation. As a result, researchers can ascertain how much, and at what rate, the volume of the East Antarctic Ice Sheet has changed.

Samples from the nunataks will, together with satellite imagery and topographic models, be utilised to improve ice sheet and climate models and yield information on how the East Antarctic Ice Sheet and sea level are affected by climate change; both historically and in the future.

“In Antarctica direct reconstructions of past climate conditions and ice changes are limited to few locations of deep ice cores and do not extend far enough to shed light on the ice sheet response to the mid-Pliocene warming,” says Dr. Irina Rogozhina, the leader of the modeling team in the MAGIC-DML project at the Center for Marine Environmental Sciences, University of Bremen.

“Numerous imprints left on nunataks by thicker predecessors of the modern East Antarctic Ice Sheet do no only reach much further into the Earth's history but also provide invaluable information on the impacts of warmer-than-modern climate on the ice sheet margins.”

About the research expedition:

Last season, MAGIC-DML worked in areas close to the Swedish research stations Wasa and Svea. This season, the starting point for field work is the South African research station SANAE IV. The researchers will work along a transect across the Ahlmann Ridge, the Borg Massif and the Kirwan Escarpment, a mountain area near SANAE IV. During the expedition, the researchers are provided with support and expert assistance from the Swedish Polar Research Secretariat’s logistics staff, which are responsible for transport, technology, safety and healthcare.

The field team that will work in Antarctica during the expedition consists of scientists from the universities in Glasgow (UK), Stockholm (Sweden) and West Lafayette (USA). The expedition has started in December 2017 and ends 10 February 2018.

MARUM, using state-of-the-art methods and through participation in international projects, investigates the role of the ocean in the Earth’s system, particularly with respect to global change. It quantifies the interactions between geological and biological processes in the ocean and contributes to the sustainable use of the oceans. MARUM comprises the DFG Research Centre and the Excellence Cluster “The Oceans in the Earth System”.