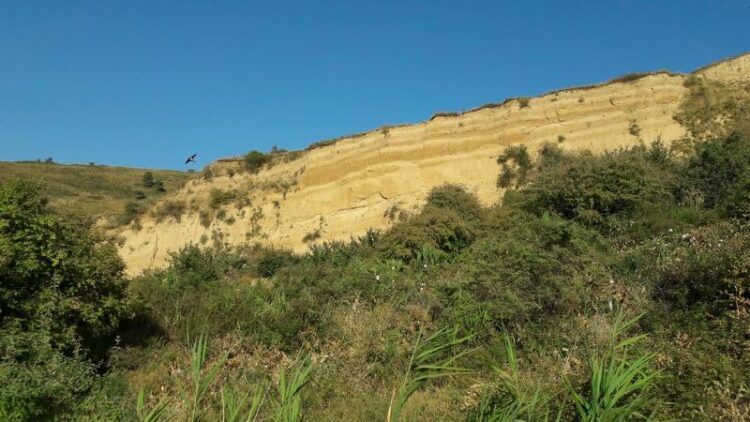 Dust deposits, or loess, in a soil profile in Tajikistan. The alternating lighter and darker bands in the deposits correspond to drier and wetter conditions, respectively, as the layers were deposited. In this way, the loess provides information about the climate of past eras.
Credit: Aditi K. Dave / University of Tübingen

Global warming and a progressively drier climate in many parts of the world are causing more dust storms. To predict how these storms are caused, researchers are looking into the past to understand where the dust came from, for how long, and over what distances it was transported. An international research team led by Dr. Aditi K. Dave and Professor Kathryn Fitzsimmons from the Department of Geosciences at the University of Tübingen, along with colleagues from Romania, Brazil, Kazakhstan and Tajikistan, have now developed a new method of doing this. They look at irregular sites – called ‘defect centers’ – in the crystal structure of the mineral quartz, which frequently appears in sedi-ments. Their study has been published in Geophysical Research Letters.

To track the origin of quartz in dust, the research team explored two defect centers – namely the ‘E1’ and the ‘peroxy’ center – in the mineral’s crystal structure. These centers occur when an oxygen at-om in the silica crystal lattice leaves its regular place and moves to a vacant position. “The concen-tration of E1′ and peroxy defect centers increases with the age of the quartz-bearing rock,” says Aditi Dave. However, once the quartz is eroded from the rock and forms sediments, the defect centers undergo no further changes. The wind transports the sediments as dust the over long distances and finally deposits it as loess.

The E1’ and peroxy defect centers have a single electron and are therefore paramagnetic. The re-search team uses electron spin resonance spectroscopy to measure the number of these defect centers in quartz. “Our method presents a much-simplified measurement protocol to fingerprint sed-iment compared with other available methods,” Dave says. “If you want to know more about how and from where the dust was transported from in the past, you need to know the origin of loess” Kathryn Fitzsimmons says. “One of advantages of this method is that we analyze a mineral that is ubiquitous in nature and is not affected by weathering, and as such has the potential to be applied to sediments from different sedimentary systems,” she says.

The research team tested their method on loess samples from the Ili Basin in Kazakhstan and the Tajik Depression in Tajikistan, which are known to have different sources of dust and also derive from rocks of different ages. “Our method was able to clearly distinguish sediments from these two basins in Central Asia, thus reaffirming the basis of our approach,” says Aditi Dave. Sediments are considered archives of past climate change. “This method offers an important addition to the study of tracking sediment transport and consequently to past climate studies, which is essential to under-standing the present-day landscape response to changing climate,” Kathryn Fitzsimmons adds.