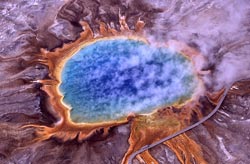 While most people are familiar with microbes that occur above ground—such as this orange-colored colony surrounding Grand Prismatic Spring at Yellowstone National Park—microbes also occur around hydrothermal vents on the ocean floor, at depths where light cannot penetrate and where they trap carbon using chemical energy instead of sunlight. Photo by Jim Peaco, National Park Service, via Wikimedia Commons.<br>

Although microbes that live in the so-called “dark ocean”—below a depth of some 600 feet where light doesn’t penetrate—may not absorb enough carbon to curtail global warming, they do absorb considerable amounts of carbon and merit further study.

That is one of the findings of a paper published in the International Society of Microbial Ecology (ISME) Journal by Tim Mattes, associate professor of civil and environmental engineering in the University of Iowa College of Engineering, and his colleagues.

Mattes says that while many people are familiar with the concept of trees and grass absorbing carbon from the air, bacteria, and ancient single-celled organisms called “archaea” in the dark ocean hold between 300 million and 1.3 billion tons of carbon.

“A significant amount of carbon fixation occurs in the dark ocean,” says Mattes. “What might make this surprising is that carbon fixation is typically linked to organisms using sunlight as the energy source.”

Organisms in the dark ocean may not require sunlight to lock up carbon, but they do require an energy source.

The hydrothermal vents the team studied are located in a volcanic caldera at Axial Seamount, an active underwater volcano in the Pacific Ocean. The site is located some 300 miles west of Cannon Beach, Ore., and about 1,500 meters beneath the surface. Mattes’ colleague, Robert Morris, gathered data and collected samples used in the study during a 2011 cruise sponsored by the U.S. National Science Foundation.

“Using protein-based techniques, we observed that sulfur-oxidizing microorganisms were numerically dominant in this particular hydrothermal vent plume and also converting carbon dioxide to biomass, as suggested by the title of our paper: ‘Sulfur oxidizers dominate carbon fixation at a biogeochemical hot spot in the dark ocean.’”

With carbon fixation occurring on a large scale in the dark ocean, one might wonder about the contribution of such activity to offset carbon emissions widely believed to contribute to global warming, but Mattes sets aside any such speculation in favor of further study.

“While it is true that these microbes are incorporating carbon dioxide into their cells in the deep ocean and thus having an impact on the global carbon cycle, there is no evidence to suggest that they could play any role in mitigating global warming,” he says.

He adds that the primary value of the investigation is to better understand how microorganisms function in the dark ocean and to increase fundamental knowledge of global biogeochemical cycles.

Mattes conducted this research at the University of Washington School of Oceanography while on developmental leave from the UI.