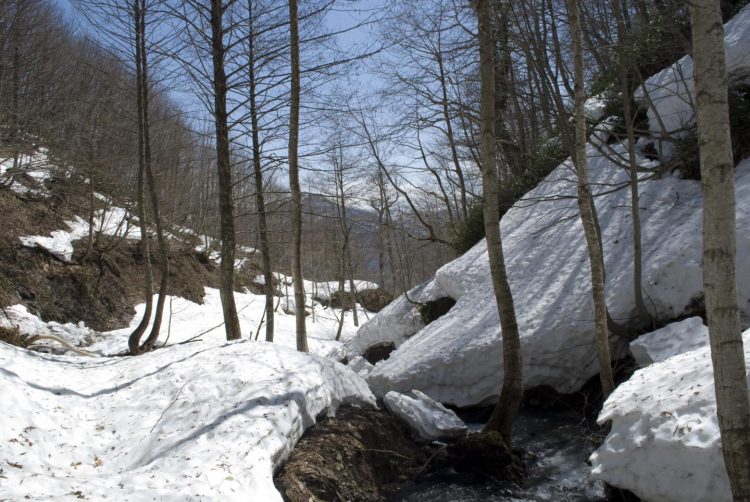 This image shows a snowpack in the Lesser Caucasus mountains of northeastern Turkey, elevation about 2,700 feet, late April 2012. The lowlands below depend heavily on seasonal snowmelt, projected to decline in this region and others in coming decades, due to global warming. Credit: Dario Martin-Benito

Gradual melting of winter snow helps feed water to farms, cities and ecosystems across much of the world, but this resource may soon be critically imperiled. In a new study, scientists have identified snow-dependent drainage basins across the northern hemisphere currently serving 2 billion people that run the risk of declining supplies in the coming century.

The basins take in large parts of the American West, southern Europe, the Mideast and central Asia. They range from productive U.S. farm land to war-torn regions already in the grip of long-term water shortages.

Snow is an important seasonal water source mainly around large mountain chains. From higher elevations, snowmelt runs gradually into the lowlands during spring and summer growing seasons, when human demand peaks. But global warming is upsetting this convenient balance.

Studies show that in many areas, more winter precipitation is falling as rain, not snow, and washing away directly; the snow that does fall is settling at progressively higher elevations, and melting earlier. The new study estimates snow's potential to supply present human needs in both current and projected climates, taking both weather trends and population into account.

“Snow is important because it forms its own reservoir. But the consequences of reduced snowpack are not the same for all places–it is also a function of where and when people demand water,” said lead author Justin Mankin, a postdoctoral fellow at Columbia University's Earth Institute based jointly at the institute's Lamont-Doherty Earth Observatory and its affiliated NASA Goddard Institute for Space Studies.

“Water managers in a lot of places may need to prepare for a world where the snow reservoir no longer exists.” The study appears this week in the journal Environmental Research Letters.

As the world warms, scientists have been observing declining snow accumulations in many regions, a trend that is expected to continue. Once-permanent snowfields are disappearing in the Rocky Mountains from Colorado to northern Montana, as well as in the Himalayas and other areas. A recent study showed that this year the snowpack in California, which is suffering an ongoing drought as well as long-term warming, reached its lowest point in 500 years.

Mankin and his coauthors calculated the possible future effects, based on how many people consume water from snowmelt. They looked at 421 drainage basins spanning the northern hemisphere, combining multiple climate models with present water-use patterns and demographics. From these data, they identified 97 basins currently serving some 2 billion people that depend on snowmelt, and run at least a two-thirds chance of declines, given present water demands.

The researchers further zeroed in on 32 of those basins, with the largest populations–collectively nearly 1.45 billion people–where present snowmelt meets a substantial proportion of human demand. These are the most sensitive to any changes, and have the most at stake.

Among them are the basins of northern and central California, where much of U.S. produce is grown; the basins of the Colorado and Rio Grande rivers, which serve much of the American West and northern Mexico; the Atlas basin of Morocco; the Ebro-Duero basin, which feeds water to Portugal and much of Spain and southern France; and a series of basins covering eastern Italy, the southern Balkans, several Caucasus nations, and northern Turkey.

Also on the list is the volatile Shatt al Arab basin, which channels meltwater from the Zagros Mountains to Iraq, Syria, eastern Turkey, northern Saudi Arabia and eastern Iran. Studies suggest that warming climate has already decreased rainfall and increased evaporation across much of the eastern Mediterranean and Mideast, and a study earlier this year suggested that the spreading civil war now engulfing the region was sparked in part by a record 2006-2010 drought.

The study concentrates only on human water supplies, but lack of snowpack may have wider ecological consequences. In the American West, land managers fear that forest fires undamped by snow might start earlier in the year, and food sources for nesting birds might start running out in late summer. Native trout depend on a steady flow of cold water during summer, so some species could face extinction.

The news is not uniformly bad. Across most of North America, northern Europe, Russia, China and southeast Asia, rainfall alone is projected to keep meeting human demand. Many changeable factors can affect water supply and demand, so the projections contain large uncertainties; in large regions, the models show that changing climate is about as likely to increase water supply as to decrease it, in the form of greater seasonal rains.

All things considered, supplies could stay about the same in India's Indus and Ganges basins, home to about 1 billion people. This is true also of the Huai, a sub-basin of China's Yellow River, with a current population of more than 130 million. And at least temporarily, accelerated melting of glaciers in the Himalayas and outlying ranges may actually increase water supplies to wide areas, including central Asian countries like Uzbekistan and Kazakhstan.

“Managers need to be prepared for the possibility of multi-decadal decreases in snow water supply,” said Mankin. “But at the same time, they could have large multi-decadal increases. Both of those outcomes are entirely consistent with a world with global warming.”

Yoshihide Wada, a researcher at the Netherlands' Utrecht University who studies global water resources, said the study makes a “convincing argument” that “climate change will add another stressor over many regions” where water scarcity is already an issue. He said this would be especially so in semi-arid areas where irrigation is supplemented by shrinking supplies of groundwater. If anything, the study could underestimate some risks, he suggests, because it does not account for projected increases in population.

What Mankin calls the “irreducible near-term uncertainties” in many projections will leave water managers faced with whether to make big infrastructure investments or not. Some areas may be able to compensate for shrinking snowmelt by expanding storage reservoirs or pumping more groundwater. But Wada says reservoirs are so expensive, many areas may not be able to afford them. And groundwater has limits; in parts of California, farmers are pumping up so much water, the land surface is visibly sinking–a trend that probably cannot be maintained for more than a few decades. Wada says more efficient irrigation methods, water recycling and switches to less water-intensive crops may be more realistic solutions.

The paper, “The potential for snow to supply human water demand in the present and future,” is available from the authors or the Earth Institute press office.

Lamont-Doherty Earth Observatory seeks fundamental knowledge about the origin, evolution and future of the natural world. Its scientists study the planet from its deepest interior to the outer reaches of its atmosphere, on every continent and in every ocean. www.ldeo.columbia.edu @LamontEarth

Goddard Institute for Space Studies, is a NASA research center that models and monitors earth systems to predict atmospheric and climate changes. It also plays an important teaching role, conducting science education programs at universities, schools and other organizations. www.giss.nasa.gov