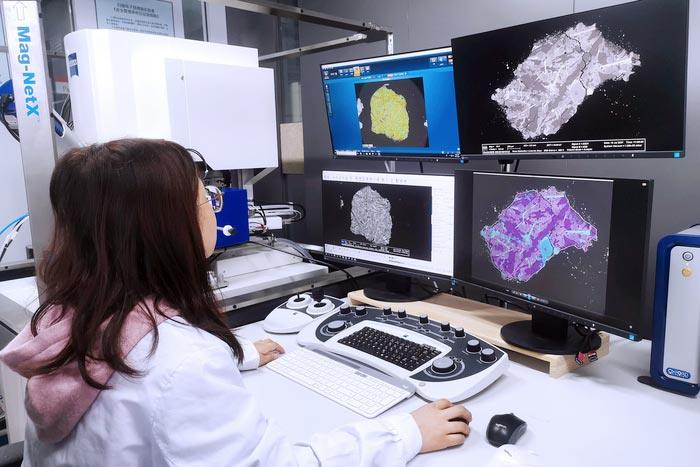 A new study led by Prof. CHEN Yi from the Institute of Geology and Geophysics of the Chinese Academy of Sciences (IGGCAS) provides an answer to the question of how young volcanism occurred on the Moon.

The researchers found that mantle melting-point depression due to the presence of fusible, easily melted components could generate young lunar volcanism.

Their findings were published in Science Advances on Oct. 21.

For the small rocky Moon, the heat fueling volcanic activity should have been lost long before these eruptions 2 billion years ago.

So what’s going on? Scientists previously speculated that either elevated water content or heat-producing elements in the lunar interior might have driven volcanism in the late stage of the Moon’s life. But the Chang’E-5 data recently published in Nature have ruled out these once-leading hypotheses.

“Recent melting of the lunar mantle can be achieved by either raising the temperature or lowering the melting point. To better understand this problem, we should estimate the temperature and pressure in which the young volcanism was created,” said Prof. CHEN.

“This is a fascinating result, indicating a significant contribution of late-stage lunar magma ocean cumulates to the Chang’E-5 volcanic formation,” said Dr. SU Bin, first author of the study.

Because the late-stage lunar magma ocean cumulates are calcium-titanium-rich and more easily melted than early cumulates, adding these fusible components to the lunar interior through gravitationally driven mantle overturn could have efficiently reduced the mantle melting temperature and thus triggered the young lunar volcanism.

This work presents evidence for the first viable mechanism to account for young volcanism on the Moon that is compatible with the newly returned Chang’E-5 samples. This study can help planetary scientists better understand the Moon’s thermal and magmatic evolution.