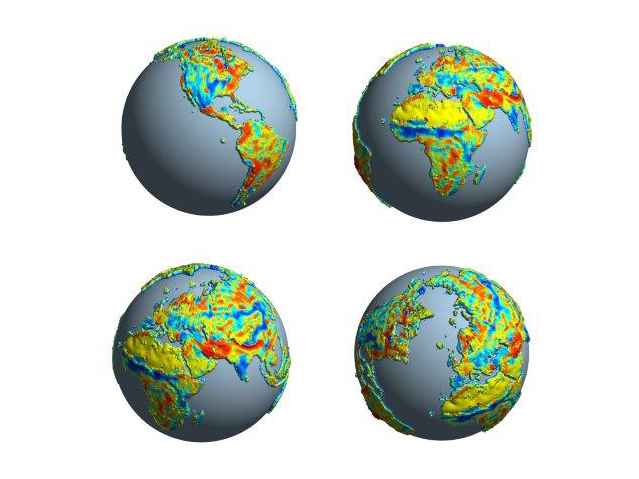 High retention is shown with a higher relief upwards. Areas where residence times depend on temperature are yellow (weak) to red (strong), those depending stronger on precipitation turquoise to blue Graphics: Nature 2014/N. Carvalhais

Plants play a crucial role in the global climate system, removing the greenhouse gas carbon dioxide from the air and converting it into carbohydrates. Carbon can be stored for several years or even many decades in the ecosystem before it is converted back into CO2 and returned to the atmosphere.

The average global carbon turnover time is 23 years, according to a new report published in Nature by an international research team headed by Nuno Carvalhais and Markus Reichstein from the Max Planck Institute for Biogeochemistry in Jena.

In the tropics, it takes just 15 years before a carbon atom is released back into the atmosphere; in higher latitudes, it takes 255 years. Surprisingly, the analysis revealed that precipitation is at least as important as temperature in determining the turnover time. The researchers also established that overall more carbon than was previously thought is stored in land ecosystems – especially in soil.

Terrestrial plants are a key climate factor: year after year, they remove roughly one-quarter of the greenhouse emissions produced by human activity from the air. This means that around 120 billion tons of carbon are absorbed by leaves, roots, wood or seeds, and ultimately by the soil when the plants die. However, in the end, the biomass decomposes and the organic material is turned back into CO2. Until now, it was unclear as to how long this cycle took in different climate zones.

“The length of time that a carbon atom remains in the ecosystem is crucial to the carbon balance,” says Markus Reichstein, who heads the Biogeochemical Integration Department at the MPI in Jena. The terrestrial balance in the global carbon cycle is an important factor in climate models. However, the way in which land ecosystems will respond to global warming is one of the greatest uncertainties of current climate forecasts. Will terrestrial plants and soils continue to be reliable storage reservoirs for excess carbon from the atmosphere in future or will they release greater amounts of carbon dioxide if temperatures increase – turning a carbon sink into a source?

To improve the forecasts, the team working with Reichstein and Nuno Carvalhais ascertained the turnover time of carbon atoms in different ecosystems and climate zones, i.e. the time that elapses from when an atom is absorbed by photosynthesis until it is released again. To do this, the researchers first calculated the amount of carbon that is stored globally in terrestrial plants and soils. They merged three comprehensive data sets to measure the carbon stock per square metre throughout the world with a resolution of 0.5 degrees. By doing this, the researchers captured, for the first time, the total carbon stock in soils – and not just the amount available in the top metre of the subsoil as was the case in previous studies. “We improved the data set and in this way obtained a more complete picture,” emphasises Reichstein.

According to the study, land ecosystems store approximately 2,800 billion tons of carbon – around 400 billion tons more than previous studies had revealed. The increase is due mainly to the rise of organic material in soils. “Other recent studies have also shown that soils contain more carbon, while less carbon is stored above ground than was previously thought,” says Carvalhais. The largest carbon reservoirs are in the tropical forests, followed by forests in the high northern latitudes.

The researchers also discovered that the overall mean global carbon turnover time is about 23 years, i.e. the time from which a carbon atom is fixed in a plant by photosynthesis to the time it is converted back to carbon dioxide. The analysis carried out by the Jena-based researchers and their colleagues shows, for the first time, how the turnover time varies in different regions around the world. Carbon returns to the atmosphere most rapidly in tropical forests and savannahs – after 14 or 16 years on average. In the arctic tundra, on the other hand, it takes approximately 65 years, and in boreal forests it takes about 53 years before the ecosystem releases a carbon atom that has been absorbed. The average turnover time increases to as much as 255 years at latitudes north of 75 degrees north.

As expected, the value is strongly dependent on temperature: the warmer it is the faster dead biomass degrades. However, precipitation also showed to be just as important in determining how quickly carbon is converted in an ecosystem. The researchers' analyses show that carbon turnover time decreases when precipitation increases. “This is completely plausible, as the microorganisms that are involved in the decomposition of plants need water for their metabolism. It takes much longer for a dead plant to decompose in a desert than it does in the rainforest,” says Carvalhais. However, up until now, insufficient consideration has been given to this correlation in global climate models. “More attention needs to be paid to this aspect in the future,” urges the Jena-based researcher.

The study revealed one unexpected correlation in the savannahs: even in tropical grasslands, carbon turnover time decreases the more precipitation falls. This was certainly unexpected, as more trees grow in these regions due to greater moisture there. “As wood has a long life, we would actually expect that carbon then stays longer in the system,” says Reichstein. One possible explanation for the apparent paradox is that fires are more frequent in heavily wooded areas, releasing the carbon faster.

The results of the study should help to improve global climate models. However, nobody can currently say how climate forecasts will change as a result of more precise carbon balancing. “The maps of carbon distribution and turnover times are the really innovative aspect of our work,” emphasises Markus Reichstein. “Like astrophysicists who discover a new world, we have also found a new image of our planet – except it is under the surface.”