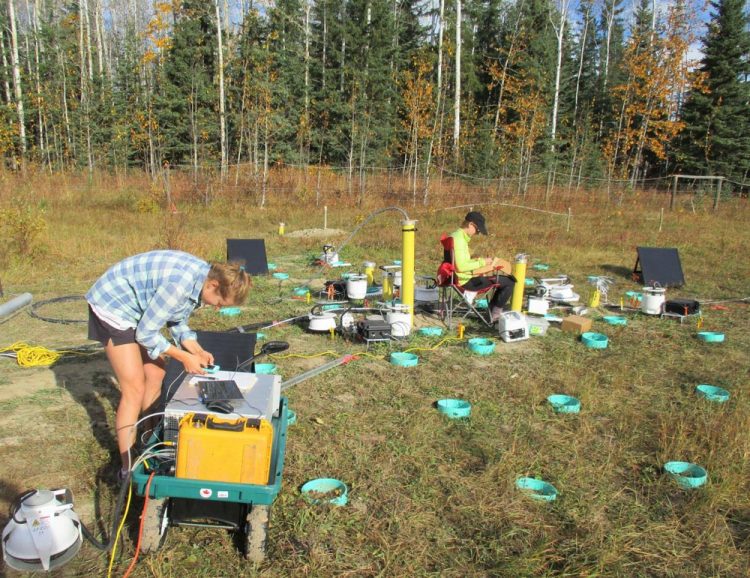 Fluctuations in atmospheric pressure can heavily influence how much natural gas leaks from wells below the ground surface at oil and gas sites, according to new University of British Columbia research. However, current monitoring strategies do not take this phenomenon into account, and therefore may be under- or over-estimating the true magnitude of gas emissions. Credit: Aaron Cahill

The unintentional leakage of natural gas from oil and gas wells into the surrounding subsurface – known as fugitive gas migration – is a major environmental concern that can lead to groundwater contamination and the emission of greenhouse gases into the atmosphere.

“Our study shows that the magnitude of gas emissions to the atmosphere can depend on atmospheric pressure before and during the time of monitoring, so short-term, one-time measurements may not be representative of average emissions.”

Variations in atmospheric pressure tend to compress or expand soil gas, with the most significant impact at sites with deep water tables, explains Forde. During a high-pressure system, soil gas is compressed and pushes leaked natural gas deeper underground, where it will likely not be detected at the surface.

When atmospheric pressure declines, natural gas trapped below the surface during the previous high-pressure conditions can escape to the atmosphere, contributing to greenhouse gas emissions.

To evaluate this effect, the team ran a field experiment in an area of significant historic and ongoing oil and gas development near Hudson's Hope, in northern B.C. Over a period of five days, 30 cubic metres of natural gas (98.3 per cent methane) was continuously injected 12 metres below the ground surface.

Atmospheric pressure and methane emissions were then continuously measured for 24 days during and after gas injection. The researchers controlled for depth and rate of well leakage, which are key factors that influence fugitive gas migration.

“We found that the magnitude and duration of atmospheric pressure changes directly influenced the amount of natural gas coming out the ground and being emitted into the atmosphere,” said Forde. “Under high pressure conditions, methane emissions decreased, sometimes even below the detection limit. But when atmospheric pressure decreased, methane emissions increased rapidly – at times more than 20-fold in less than 24 hours.”

As a result, continuous monitoring over a longer period of time is key. “This will help to more accurately detect and evaluate gas migrations and emissions and thus, the risks posed by leaking oil and gas wells,” said Forde.

There are over four million onshore hydrocarbon wells around the world, a portion of which are known to suffer loss of structural integrity, which can lead to this type of subsurface leakage and resulting greenhouse gas emissions.

“The results of our study allow us to move towards refining and improving regulations and monitoring methods,” said co-author Aaron Cahill, co-director of the Energy and Environment Research Initiative at UBC. “This will help determine which leaky wells should be prioritized for remedial action to limit the most substantial greenhouse gas emissions.”

The study was published in Scientific Reports. Funding for the research was provided by Natural Resources Canada, Geoscience BC, the Natural Sciences and Engineering Research Council of Canada (NSERC), the Canadian Foundation for Innovation (CFI), and the British Columbia Oil and Gas Commission.