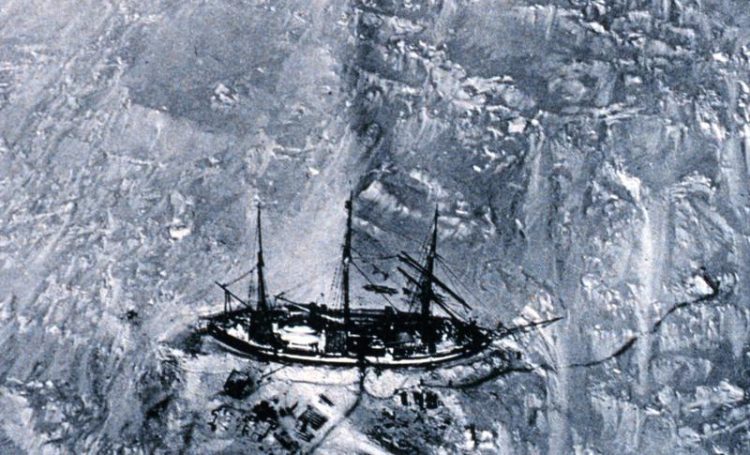 Ice observations recorded in the ships’ logbooks of explorers such as the British Captain Robert Scott and Ernest Shackleton and the German Erich von Drygalski have been used to compare where the Antarctic ice edge was during the Heroic Age of Antarctic Exploration (1897–1917) and where satellites show it is today.

The study, published in the European Geosciences Union journal The Cryosphere, suggests Antarctic sea ice is much less sensitive to the effects of climate change than that of the Arctic, which in stark contrast has experienced a dramatic decline during the 20th century.

The research, by climate scientists at the University of Reading, estimates the extent of Antarctic summer sea ice is at most 14% smaller now than during the early 1900s.

Jonathan Day, who led the study, said: “The missions of Scott and Shackleton are remembered in history as heroic failures, yet the data collected by these and other explorers could profoundly change the way we view the ebb and flow of Antarctic sea ice.

“We know that sea ice in the Antarctic has increased slightly over the past 30 years, since satellite observations began. Scientists have been grappling to understand this trend in the context of global warming, but these new findings suggest it may not be anything new.

“If ice levels were as low a century ago as estimated in this research, then a similar increase may have occurred between then and the middle of the century, when previous studies suggest ice levels were far higher.”

The new study published in The Cryosphere is the first to shed light on sea ice extent in the period prior to the 1930s, and suggests the levels in the early 1900s were in fact similar to today, at between 5.3 and 7.4 million square kilometres. Although one region, the Weddell Sea, did have a significantly larger ice cover.

Published estimates suggest Antarctic sea ice extent was significantly higher during the 1950s, before a steep decline returned it to around 6 million square kilometres in recent decades.

The research suggests that the climate of Antarctica may have fluctuated significantly throughout the 20th century, swinging between decades of high ice cover and decades of low ice cover, rather than enduring a steady downward trend.

This study builds on international efforts to recover old weather and climate data from ships’ logbooks. The public can volunteer to rescue more data at oldweather.org.

Day said: “The Southern Ocean is largely a ‘black hole’ as far as historical climate change data is concerned, but future activities planned to recover data from naval and whaling ships will help us to understand past climate variations and what to expect in the future.”

Capt Scott perished along with his team in 1912 after missing out on being the first to reach the South Pole by a matter of weeks, while Shackleton’s ship sank after becoming trapped in ice in 1915 as he and his crew journeyed to attempt the first ever cross-Antarctic trek.

In addition to using ship logbooks from three expeditions led by Scott and two by Shackleton, the researchers used sea-ice records from Belgian, German and French missions, among others. But the team was unable to analyse some logbooks from the Heroic Age period, which have not yet been imaged and digitised. These include the records from the Norwegian Antarctic expedition of 1910–12 lead by Roald Amundsen, the first person to reach both the south and north poles.

MORE INFORMATION
This research is presented in the paper ‘Estimating the extent of Antarctic summer sea ice during the Heroic Age of Exploration’ to appear in the EGU open access journal The Cryosphere on 24 November 2016.

The scientific article is available online, free of charge, from the publication date onwards, at http://www.the-cryosphere.net/10/2721/2016/. *A pre-print version of the final paper is available for download at https://www.egu.eu/news/308/antarctic-explorers-help-make-discovery-100-years-af….*

The *European Geosciences Union (“EGU”:http://www.egu.eu/)* is Europe’s premier geosciences union, dedicated to the pursuit of excellence in the Earth, planetary, and space sciences for the benefit of humanity, worldwide. It is a non-profit interdisciplinary learned association of scientists founded in 2002. The EGU has a current portfolio of 17 diverse scientific journals, which use an innovative open access format, and organises a number of topical meetings, and education and outreach activities. Its annual General Assembly is the largest and most prominent European geosciences event, attracting over 11,000 scientists from all over the world. The meeting’s sessions cover a wide range of topics, including volcanology, planetary exploration, the Earth’s internal structure and atmosphere, climate, energy, and resources. The EGU 2017 General Assembly is taking place in Vienna, Austria, from 23 to 28 April 2017. For information about meeting and press registration, please check http://media.egu.eu, or follow the EGU on “Twitter”:http://twitter.com/EuroGeosciences and “Facebook”:http://www.facebook.com/EuropeanGeosciencesUnion.

If you wish to receive our press releases via email, please use the Press Release Subscription Form at http://www.egu.eu/news/subscribe/. Subscribed journalists and other members of the media receive EGU press releases under embargo (if applicable) 24 hours in advance of public dissemination.

*The Cryosphere (“TC”:http://www.the-cryosphere.net)* is an international scientific journal dedicated to the publication and discussion of research articles, short communications, and review papers on all aspects of frozen water and ground on Earth and on other planetary bodies. The main subject areas are ice sheets and glaciers, planetary ice bodies, permafrost, river and lake ice, seasonal snow cover, sea ice, remote sensing, numerical modelling, in situ and laboratory studies of the above and including studies of the interaction of the cryosphere with the rest of the climate system.

*Notes from the University of Reading*

The Heroic Age of Antarctic Exploration refers to the period of 1897-1917 when several expeditions took place to explore the Antarctic. Logbook data was used from the following ships:

* Endurance (1914) Sir Ernest Shackleton’s ship that became trapped in ice during the ill-fated Imperial Trans-Antarctic Expedition
* Terra Nova (1903–04 and 1910–13) Captain Robert Scott’s expedition during the race to the South Pole that cost him and his team their lives
* Scotia (1903–04 and 1910–13) Ship used in expedition led by William Spiers Bruce to explore the Weddell Sea and collect specimens
* Nimrod (1908–09) Another of Shackleton’s voyages that was more successful. It included notable achievements including the ‘Great Southern Journey’ to a new farthest south latitude.
* Aurora (1911–14 and 1914–16) Another ship that was part of Shackleton’s Trans-Antarctic Expedition
* Discovery (1902) Expedition by both Scott and Shackleton which achieved a furthest south lattitude
* Pourquoi-Pas IV (1909–10) carried a team in the Jean-Baptiste Charcot expedition that returned with several scientific discoveries, including the discovery of Charcot Land island.
* Gauss (1902–03), the first German expedition to Antarctica, led by Erich von Drygalski
* Belgica (1898–99), first winter expedition to Antarctica, led by Adrien de Gerlache

Animations showing the routes taken by these explorers and how their ice observations compare to modern satellite records are available by contacting the University of Reading press office on +44 (0)118 378 5757 or pressoffice@reading.ac.uk.

A video explaining the study is on the University of Reading YouTube channel at https://youtu.be/LlD47gPs2o4.

The University of Reading has an ISDN radio link and a Globelynx video camera service for broadcast interviews which can be booked through the press office.